Ghoomar, in which Deepika Padukone performs Rajasthani folk dance, has been singled out for specific complaints 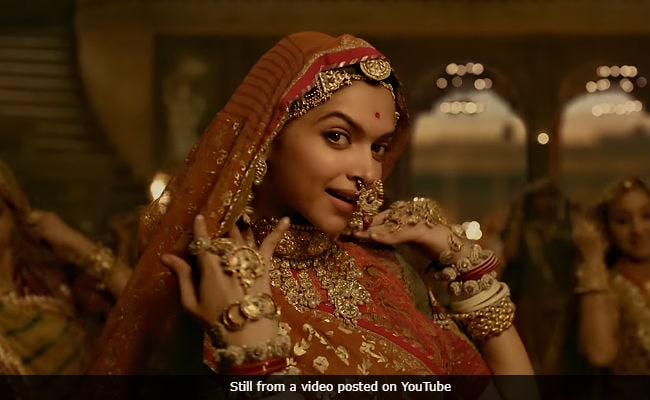 New Delhi: Protests against Deepika Padukone's new film Padmavati continue to pile up with a Chattisgarh royal now criticising the song Ghoomar, saying that Rajput queens never danced before anybody. The fact that this is a film and, by definition, fiction seems to have escaped a staggeringly large number of people - most of them from Rajput groups. Heena Singh Judeo, daughter-in-law of Dilip Singh Judeo of Chhattisgarh's former royal family, is the latest to join the chorus of protests. She told news agency IANS: "History has witnessed that none of the Rajput maharanis has ever danced in front of anyone, and they cannot play with history."

Like the others opposing the movie, Ms Singh Judeo would like an advance screening of Padmavati. "Our only demand is that the filmmaker should show us what the movie is...We are just saying that we should know what they have given in the movie exactly," she told IANS.

Padmavati is directed by Sanjay Leela Bhansali and based on the legend of Rani Padmini of Chittor who is believed to have committed jauhar to escape Emperor Alauddin Khilji. Certain groups, belonging mainly to Rajasthan, claim they are concerned that the film wrongly depicts a romance between Padmini and Khilji. Mr Bhansali has repeatedly denied that it does.

Ghoomar, in which Deepika Padukone as Padmini performs the traditional Rajasthani folk dance, has been singled out for specific complaints. A women's body named Kshatrani Sankalp told Hindustan Times, "The queen is shown performing the ghoomar dance in indecent clothes, which is a faulty portrayal of Rajputs. A Rajput queen would never perform before an audience nor bare her midriff." On Twitter, there were echoes of the grumbles against Ghoomar.

Rani Padmavati never danced (ghoomar). She was a brave, cultured woman. The character in film does not seem at all like that. Total non-sense is going on for cheap publicity, fame.@Vinayak52030046@vinodgadikar@pansare11https://t.co/yNdIoh6hfy

#Ghoomar dance of #Padmavati symbolises the root cause of all problems of #India. While our rulers/people were busy dancing/praying invaders came from across the world to loot us. @deepikapadukone#SanjayLeelaBhansali , @RanveerOfficial@shahidkapoor

Several demands have been made for Padmavati to be screened privately for the approval of the Rajput groups opposing the film. Lead actress Deepika Padukone was trolled online after saying yesterday, "REGRESSED QUOTE."

Promoted
Listen to the latest songs, only on JioSaavn.com
Padmavati has been besieged ever since January when the sets were attacked in Jaipur and Sanjay Leela Bhansali assaulted. Sets were later vandalised in Maharashtra as well. Celebrities such as Salman Khan and Sidharth Malhotra have spoken up in defence of the film, saying it should be given a chance.