Debut With Shah Rukh Khan? Mahira Khan's Mother Could Not Believe It 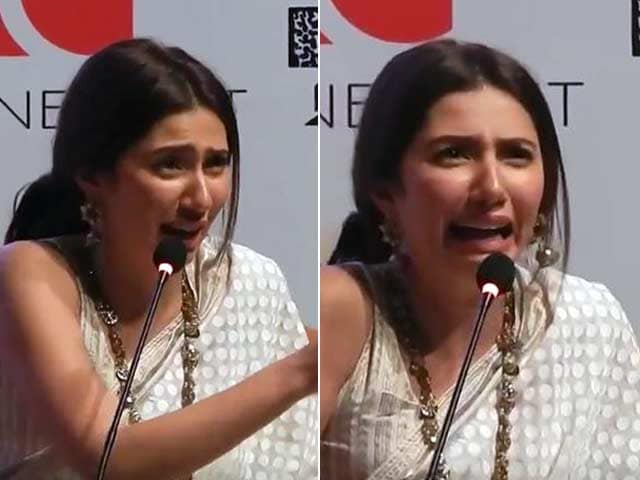 New Delhi: Pakistani actress Mahira Khan is all set to make her Bollywood debut opposite Shah Rukh Khan in Raees, which releases on January 26. At a recent interactive session with the media, the 33-year-old actress enacted her mother's reaction to being told that Mahira had been cast in a Shah Rukh Khan film. Mahira is admired for starring in Pakistani films like Bin Roye, Manto and Ho Mann Jahaan but is best known for her role on Pakistani TV show Humsafar, in which she co-starred with Fawad Khan. Directed by Rahul Dholakia, the much-awaited Raees is set in the dry state of Gujarat and stars SRK as a liquor baron and Nawazuddin Siddiqui as an investigative cop.

Shah Rukh's superstar status can overwhelm many and it appears that Mahira's mother is one of them. Mahira reveals her mother was taken by surprise when she learnt her daughter will co-star with Shah Rukh. When first told, she refused to believe and broke down crying. Mahira acts out the entire episode with her mother in the most hilarious fashion. Mahira's mother insisted that Mahira was not speaking the truth and kept on saying: "No, you're lying...", sobbing at the same time.

Mahira, who plays a character named Mohsina in the film, had a hall full of people laughing with her hilarious expressions. We are sure her mother herself was rolling on the floor, clutching her stomach, in front of the TV:

#mahirakhan "oh my god,My mother will kill me"
Mahira's mom reaction when told her she'd signed a film opposite @iamsrk#3DaysToDearZindagipic.twitter.com/m2mbJaQG5y

Mahira joins the league of actresses whose first Bollywood film was with Shah Rukh Khan - she's in good company, with Deepika Padukone and Anushka Sharma - and she only had good things to say about her Raees co-star:

Mqhira Khan @TheMahiraKhan about SRK - "He's The No.1 Yet He Was The Hardest Working Person On Set"pic.twitter.com/zfKRPuJZll

There were reports that Mahira Khan, 33, was to be dropped from Raees after the controversy about Fawad Khan being cast in Karan Johar's Ae Dil Hai Mushkil. Earlier this month, Raees co-producer Ritesh Sidhwani told NDTV: "The government has not banned anyone, have they? They are still issuing visas. The government actually has not said to ban or not work with someone and Mahira is in Raees and that's the end of the story."

Promoted
Listen to the latest songs, only on JioSaavn.com
Raees, produced jointly by SRK's Red Chillies Entertainment and Excel Entertainment, owned by Ritesh and Farhan Akhtar, was originally slated to release last July on Eid but was rescheduled to avoid a clash with Salman Khan's Sultan. A possible Diwali release was also avoided, averting a collision with Ajay Devgn's Shivaay and Karan Johar's Ae Dil Hai Mushkil. Raees will now release alongside Hrithik Roshan's Kaabil, negotiations between the producers of both films having had no result. Hrithik recently said that his friendship with Shah Rukh Khan would not be affected by the clash between their films.