Debut Producer Kareena Kapoor To Ekta: "May This Film Cross Our Parents' Biggest Hit Together"

On Wednesday, Ekta Kapoor dedicated a lengthy shout out to Kareena, welcoming her on board the team of female producers 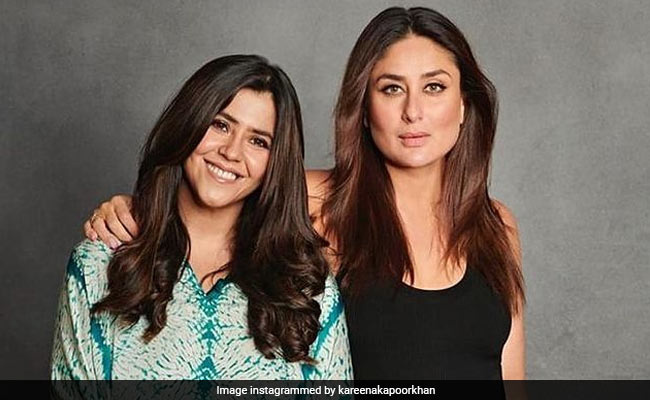 "There's no one I'd rather partner with!" Kareena Kapoor wrote in her thank you note for Ekta Kapoor. Kareena recently revealed she has ventured into production and her first project will also be jointly produced by Ekta Kapoor and Hansal Mehta. On Wednesday, Ekta Kapoor dedicated a lengthy shout out to Kareena, welcoming her on board the team of female producers. Replying to Ekta, Kareena wrote: "May this film cross our parents' biggest hit together (Farz)... with their blessings... always. Let's do this!" 1967 movie Farz, a spy thriller, starred Ekta Kapoor's father Jeetendra and Kareena Kapoor's mom Babita. Farz, which started on a slow note at the box office, turned out to be a huge success eventually.

Ekta Kapoor, who founded the production company Balaji Telefilms, wrote in her post ow she broke the boundaries of gender stereotypes with her venture. "28 years ago, when my mum and I started our production house, everyone thought my dad was 'The Producer' and that we worked for him. We tried to tell people that while he's a huge support system to us, WE are actually the producers here! The notion of a 'producer' back then was strongly associated only with a man. Decades later, people have finally gotten around to accepting that a 'producer' doesn't necessarily mean 'male'! It's been a hard journey, but an encouraging and happy one! I'm so glad that today, we can empower each other like this!"

Sending best wishes to Kareena, Ekta added: "Here's to wishing Kareena Kapoor the best on her journey as a producer...adding another feather to her already illustrious career! May we have more of her in our tribe!"

Kareena Kapoor will also star in her first production venture. The film will be set in the UK and is inspired by true incidents. Other details about the film have not been revealed yet.