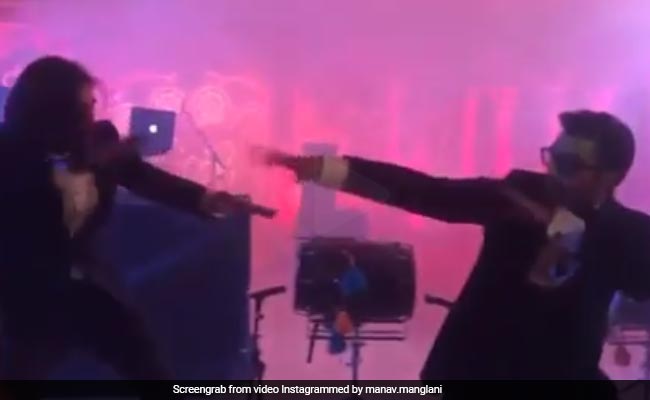 An old video of Malaal star Meezaan Jaaferi (son of actor Jaaved Jaaferi) dancing to Malhaari with main man Ranveer Singh at a celebrity wedding resurfaced on the Internet ahead of the release of Malaal. Meezaan, who worked with director Sanjay Leela Bhansali in Bajirao Mastani among other films, matched steps with Ranveer and he was undoubtedly at par with Ranveer. We also spotted actor Abhishek Bachchan in the video, who appears to be reluctant to join the unstoppable dancing duo. The video appears to have been shot during the sangeet ceremony of Isha Ambani and Anand Piramal, which was hosted in Udaipur last year.

With much ado, take a look at Ranveer Singh and Meezaan Jaaferi burn the dance floor:

Apart from the aforementioned Bajirao Mastani, Meezaan Jaaferi worked with Mr Bhansali in "Padmaavat," in which the actor also filled in for Ranveer Singh, who played antagonist Alauddin Khilji. Meezaan told IANS in an interview: " I was at the set, when they were discussing how it's going to be difficult to shoot some scenes because Ranveer was unavailable due to a brand commitment. But Sanjay sir said 'we'll do it', and to my surprise, he turned to me and said I should do it. The next day on the set, they asked me to memorise all Ranveer's gestures and lines... There are two scenes in "Padmaavat" where I stood in for Ranveer Singh."

However, Sanjay Leela Bhansali saw an actor in Meezaan during the filming of Bajirao Mastani when he stepped in for a costume trial session. Mr Bhansali told PTI: "Four years ago, Sharmin (Sharmin Segal who is debuting opposite Meezaan in Malaal) was assistant on Bajirao Mastani and I said bring someone for costume trial and she got Meezaan. When he entered, I was like a star has arrived."

Sanjay Leela Bhansali is producing Malaal, in which he's launching his niece Sharmin Segal and Meezaan Jaaferi. Malaal opens in theatres on July 5.