If only we were living the life of Priyanka Chopra! 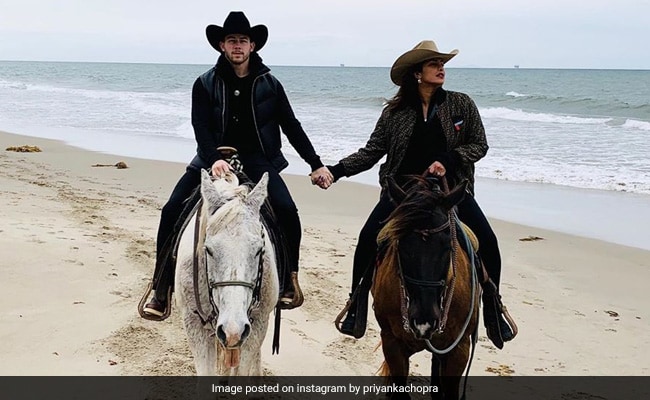 Priyanka and Nick's Sunday looked like this (courtesy priyankachopra)

If only we were living the life of Priyanka Chopra! The actress and her husband Nick Jonas had the perfect Sunday with some sun, sand and sea, topped off with horse rides along the shore. Priyanka Chopra and Nick Jonas spent the Sunday in the Californian city of Carpinteria, located in Santa Barbara County. Both Nick and Priyanka shared glimpses of their "magical" Sunday on Instagram with one-word captions. "Sunday," wrote Nick while Priyanka wrote: "Magic" for her post. The photos make it evident that Priyanka happily channeled her inner cowgirl persona over the weekend in Santa Barbara. Nick Jonas too is quite impressive in his cowboy avatar.

In the series of photos shared by Nick, the power couple can be seen riding towards the shore and then strolling around the beach on their horses.

Priyanka and Nick, who rocked the world with news of their romance, got married in December 2018, and have been inseparable ever since. They often slice out time from their super busy work lives to go vacationing and their Santa Barbara getaway is one more added to the list. Priyanka and Nick celebrated New Year like this:

They had the most awesome Christmas in Mammoth Mountains last year:

They also went to the Grammys and Golden Globes looking like this: