Count The Kapoors In This Throwback Pic. Courtesy Sanjay Kapoor

Can you spot Sonam and Rhea Kapoor in the picture? 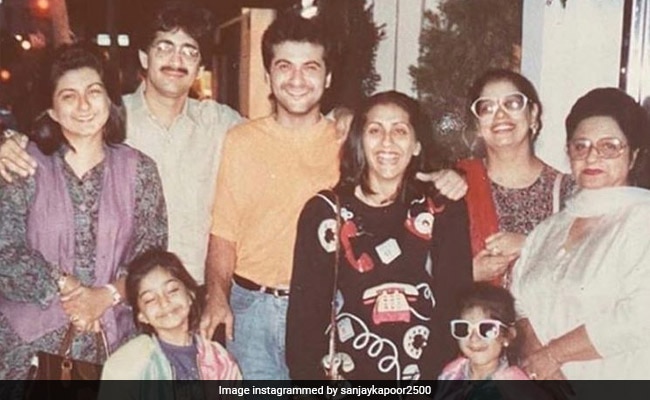 Sanjay Kapoor shared a lovely throwback picture of himself along with his family members on Instagram and it has our heart. The picture features members of the Kapoor family, including Sonam, Rhea, Sunita Kapoor, Nirmal Kapoor, Sandeep and Reena Marwah and the late Mouna Shourie. Sanjay revealed that the picture was taken during summer vacation in Los Angeles, California. He captioned the post: "Throwback #summerholidays #memories."

Boney Kapoor, Anil Kapoor and Sanjay are the sons of filmmaker Surinder Kapoor, who mostly produced films starring his son Anil Kapoor, such as PukarNo Entry, Judaai and Loafer, to name a few.

Sanjay Kapoor made his debut in the film industry with the 1995 movie Prem, opposite Tabu. He went on to feature in films such as Raja (1995), Auzaar (1997), Mohabbat (1997) and Sirf Tum. His last film was The Zoya Factor. He is married to Maheep Kapoor and they are parents to Shanaya and Jahaan Kapoor. Shanaya Kapoor is also set to step into Bollywood. However, she will start her career as an assistant director in a film featuring her cousin Janhvi Kapoor.