This uncanny resemblance in the captions did not escape Sara Ali Khan's notice, who hilariously asked for due credit from Varun Dhawan 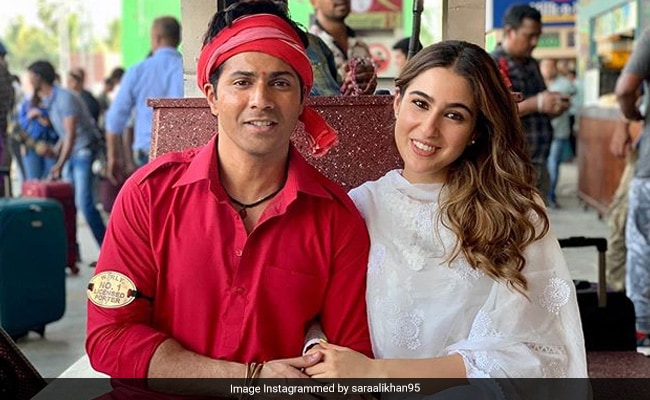 Varun Dhawan and Sara Ali Khan shared the same brand new photo from the sets of Coolie No 1 on their respective Instagram feed with almost similar captions. Blame it on Varun Dhawan, actually. LOL. It appears that Sara Ali Khan was the first one to caption her photo with a "cool" reference alluding to "coolie" and Varun quickly borrowed it for his own post. "Cool and coolie," Sara captioned her photo with Varun dressed in his Coolie No 1avatar while Varun, with the use of emoticons, wrote this on his Instagram: "He's a cool coolie" and then added: "Bahut kaam karati hai yeh Sara ra."

This uncanny resemblance in the captions did not escape Sara Ali Khan's notice, who hilariously asked for due credit from Varun Dhawan and also trolled him in the process. "I see you trying to copy, steal and smartly (not really) adapt my captions," Sara wrote in the comments. She's a funny girl, we tell you.

In the Coolie No 1 photo, Sara and Varun can be seen posing together at what appears to be a railway station. Sara's post garnered over 5 lakh likes within an hour. 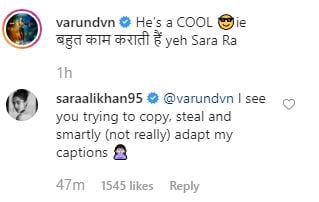 Sara Ali Khan and Varun Dhawan, who will be seen together for the first time, dropped their first looks from the movie in August. Since then, the onscreen jodi continue to keep their fans updated with fun glimpses from their shooting diaries.

fun in the sun @saraalikhan95 Coolie no1

Varun Dhawan and Sara Ali Khan's Coolie No 1 is a remake of David Dhawan's 1995 film of the same name, which featured Govinda in the titular role and Karisma Kapoor as his love interest. While Varun has stepped into Govinda's shoes in the remake, Sara has been cast in the role originally played by Karisma.

Coolie No 1, which is Sara Ali Khan's fourth film announcement in Bollywood, is all set to hit screens on May 1, 2020.