Connect Review: Nayanthara Shines Bright In A Dystopian Drama That Thrives In The Dark

Connect Review: The film connects with the audience in substantial ways without having to resort to the kind of in-your-face means that horror films usually foist upon the audience. 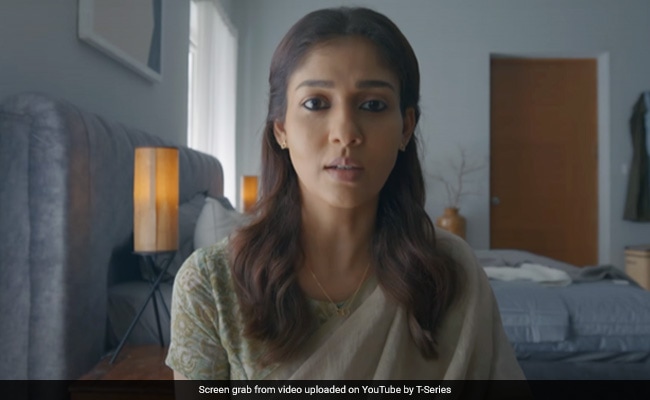 Rating: Three stars (out of 5)

A supernatural thriller set in the time of Covid, Ashwin Saravanan's Connect has its share of jump scares as well as other genre tics. But, if you can tide over the ritualistic babble that it culminates in, it isn't one of those predictable, hackneyed horror films that merely seek to shock us out of our seats.

The screenplay, authored by the husband-wife writing team of Saravanan and Kaavya Ramkumar, alternates between the sombre and the nightmarish. The impact of the range of feelings that the film arouses is heightened significantly by the steady understated power of the lead performance by Nayanthara.

She shines bright in a dystopian drama that thrives in the dark. She uses her eyes and facial expressions rather than shrieks and squeals to convey fear and foreboding as the unknown creeps up on the sorted and unflappable woman she plays.

Connect, produced by Vignesh Sivan's Rowdy Pictures and released nationwide in Hindi a week after the original Tamil version hit the screen, weaves into its story of disease, death, divinity and the devil a complement of unsettling twitches that are triggered by a Covid-related tragedy and girl's response to it.

God and Satan are at war in a world torn asunder by sickness and sorrow. A little girl faces the brunt. A tormented woman fights to save her daughter. A grandfather offers constant advice online. An electronically connected pastor steps in to try and exorcise the evil spirit. Amid all the blather, the film stays firmly focussed on the mother-daughter relationship.

The emotional bond between the two women is thrown into complete disarray by a demonic possession. The script employs the bedevilment as a metaphor for a rampaging, devastating virus. The connect between the two is verbalised by the exorcist himself.

With its loud thuds, persistent knocks on the door, mysterious rumbles, fluttering curtains, flickering lights, eerie shadows in the dark, upturned objects, the works, the 99-minute Connect banks upon all the devices that one would expect in a horror film. Yet it manages to break away at crucial points from the practices ordinarily associated with the spooky business of peddling fear and heightening anxieties.

Connect, which reunites director Saravanan with lead actor Nayanthara after the 2015 neo-noir psychological drama Maya, examines dimensions of loss and grief through an occult phenomenon that that sets off a disquieting chain of events for a quarantining woman, Susan, and her young musician-daughter, Anna.

The pandemic and the lockdown have taken their toll on both. But the nature of the impact on the two isn't the same. The mother, to begin with, seems completely unperturbed by the crisis that hits her - and the world at large. The daughter, severely distressed, goes into a shell, an act that renders her vulnerable to a Satanic invasion.

Talking of an invasion, the possession of a human by the devil is akin in Connect to a home invasion by a hostile force from another world. Disease is a demon, and vice-versa, and it pushes Anna into an abyss from where only an exorcist can rescue her.

The two women are in separate rooms but the changes that Anna undergoes send ripples not only through the entire house in which they isolate themselves from the world and from each other, but also through the spaces that Susan's father Arthur (Sathyaraj) and a pastor-exorcist (Anupam Kher) occupy.

Connect is Saravanan's third directorial venture. He has established himself as a genre filmmaker with a distinct, novel style marked by keen empathy for women fighting off hurtful forces. In Maya, a single mother who works in ad films to make ends meet is haunted by a ghost.

In Game Over (2019), starring Taapsee Pannu, the heroine is a talented game developer grappling with PTSD, a direct consequence of a horrific rape.

In Connect, Saravanan portrays two women - one a mid-career professional in a position of authority, the other a gifted young girl looking forward to making a career as a musician. The latter's youthful hurry to branch out on her own creates friction between her and her mother, who is firm in her belief that the girl must complete her education before leaving home to pursue her dream.

Saravanan, with the aid of cinematographer Manikantan Krishnamachary, engages visuals, an interplay light and shade, skewed camera angles and movements and sound effects to conjure up an atmosphere of great unease and dread.

The film's early scenes, which are happy and filled with warmth as the family vacations in Goa, quickly give way to intimations of the dangers up ahead. The pandemic, and the lockdown that it necessitates, yanks Anna's doting dad, Dr. Joseph Benoy (Vinay Rai), away from the family because the hospital needs him to be on duty 24X7.

The characters from here on are unable to make physical contact with each other. They converse on Zoom calls. The restrictions on physical interactions inevitably lead to unnerving distancing and disorientation. The doctor can connect with his wife and child only through digital means. Anna, the youngest, is the worst affected by the sudden forced separation.

Susan and Anna are suspected to be Covid-positive. As they await their test reports, they isolate within the house while they keep in touch with the girl's grandfather. Susan and her dad soon begin to feel that something is seriously wrong with Anna. They seek help on her behalf.

Nayanthara stellar performance is supported admirably by Sathyaraj and Anupam Kher. Newcomer Haniya Nafisa, cast in the challenging role of a girl possessed, is no less impressive.

When the confrontation between the devout and the diabolic reaches a crescendo, the pitch of the film is amped up considerably. Connect is never, however, in danger of drowning in shrillness because at all other times, the director does not budge from his controlled and muted methods to tell a story that vacillates between the real and the spectral.

Connect connects with the audience in substantial ways without having to resort to the kind of in-your-face means that horror films usually foist upon the audience.