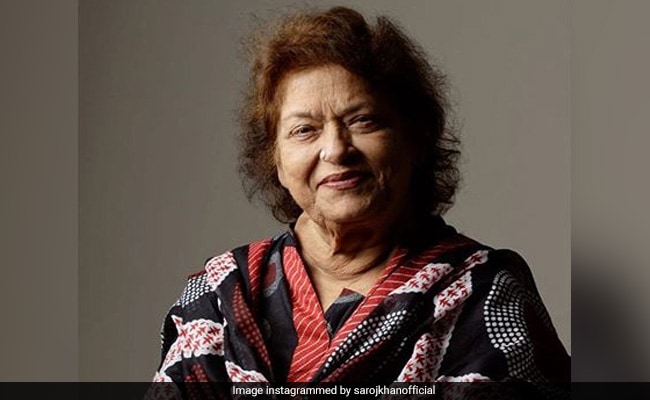 Bollywood dance choreographer Saroj Khan, who is admitted to Mumbai's Guru Nanak Hospital since last week after complaining of breathing trouble, is "under observation and doing fine" now, family sources told news agency PTI. The 71-year-old choreographer was admitted to the Mumbai hospital on June 20 after she complained of difficulty in breathing. She will be "discharged soon," reported PTI. "She is under observation but is doing fine. She is much better. She shall be discharged soon," a source close to Saroj Khan's family told PTI. After Saroj Khan was hospitalised, a mandatory COVID-19 test was done and she tested negative for the virus.

"She is fine now and recovering. She had breathing issues and was taken to hospital for that. Her COVID-19 test was done which turned out negative. She doesn't have any symptoms. She is likely to be discharged in a day or two," a family source told PTI on Tuesday.

Updating Saroj Khan's fans about her health condition, filmmaker Anubhav Sinha tweeted on Wednesday: "Just spoke to people looking after Saroj Ji. She is in fact in a hospital. But doing well. Should be out in a day or two. Nothing to worry. Was there for regular treatment. Felt weak, got admitted. Tested COVID-19 too. Negative."

Just spoke to people looking after Saroj Ji. She is in fact in hospital. But doing well. Should be out in a day or two. Nothing to worry. Was there for regular treatment. Felt weak, got admitted. Tested Covid too. Negative. #SarojKhan

Director Kunal Kohli also, in a tweet, wrote that he recently talked to Saroj Khan's son Raju Khan and assured the fans of the renowned choreographer that she is "better" and is "recuperating." He tweeted: "Spoke to Raju Khan just now, son of Saroj Khan. He said Masterji is doing better and is recuperating. She was taken to the hospital as she felt breathless. No COVID-19. She's better now. He thanks everyone for their prayers and wishes. We hope and pray our beloved Masterji is home soon."

Spoke to #RajuKhan just now.Son of #SarojKhan,He said Masterji is doing better & is recuperating. She was taken to the hospital as she felt breathless. No covid.She's better now.He thanks everyone for their prayers & wishes.We hope & pray our beloved Masterji is home soon

Saroj Khan, who has won three National Awards for Best Choreography for her work in Devdas, Jab We Met and the 2007 Tamil film Shringaram, is credited with choreographing more than 2,000 songs. She has choreographed some of the most popular Bollywood tracks such as Ye Ishq Haaye featuring Kareena Kapoor from the 2007 film Jab We Met, Ek Do Teen featuring Madhuri Dixit from Tezaab, Dola Re Dola from Sanjay Leela Bhansali's Devdas, starring Aishwarya Rai Bachchan, Madhuri Dixit and Shah Rukh Khan.