Cargo Review: Vikrant Massey and Shweta Tripathi etch out characters that are tangible and emotionally engaging. Director Arati Kadav keeps her feet on the ground as she lets her mind fly free. A real gem 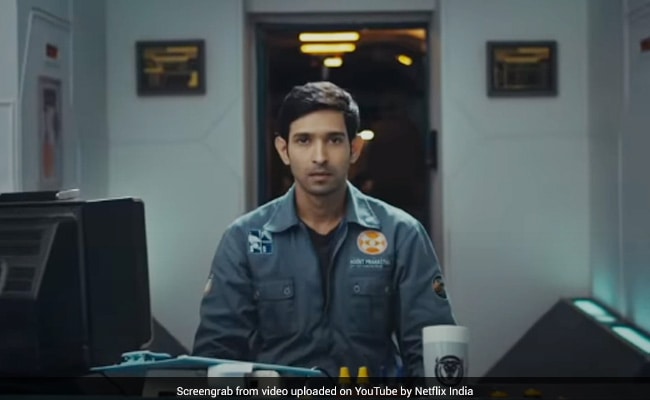 Cargo Review: Vikrant Massey in a still from the film. (courtesy: YouTube)

The imponderables of life, the finality of death and the tantalizing promise of life after death intermingle in debutante Arati Kadav's Cargo, a phenomenally innovative sci-fi hybrid of high philosophy, black comedy and emotional wisdom. The subdued execution conceals a crackling, buoyant flow of subliminal ideas that are at once fresh and 'timeless'. Set in 2027, many decades after the Homo Rakshasas - descendants of the demons of Indian mythology - have entered Space Age and have buried their differences with earthly humans, Cargo, in spirit and substance, is steadfastly homegrown.

The film, streaming on Netflix, overturns the human-demon hierarchy with intent. It presents the rakshasas as prudent, benign creatures who are honest to a fault and take pride in their consistency of purpose. It is humankind that is susceptible to debilitating doubts - both in life and in the aftermath of death.

Cargo gives the effects-heavy genre a vigorously indigenous spin by weaving the notion of reincarnation into a tale that carries us beyond time and space into a domain where concepts derived from age-old spiritual practices are neatly, and meaningfully, dovetailed into flights facilitated by advancements in technology, intergalactic travel and cross-planetary communication.

Nothing that we see in Cargo is remotely derivative. Produced by Kadav, Shlok Sharma, Navin Shetty and Anurag Kashyap, the film is a small, independent effort that relies on innovative camerawork (Kaushal Shah), production design (Mayur Sharma) and soundscape (Anish John), besides, of course, Kadav's exceptionally intelligent screenplay, to convey a sense of scale that belies its budgetary constraints.

Cargo is as spirited in its assertion of unbridled creativity as it is confident in tiding over the limits of resources to craft a film that is impressive in ambition and scope.

Several of its producers and technicians, besides filmmakers like Hansal Mehta and Somnath Sen, screenplay writer Anjum Rajabali and actor Konkona Sen Sharma (in a crucial tone-altering cameo), pop up on screen in the guise of key characters and for varying lengths of time.

Lead actor Vikrant Massey plays Prahastha, a lonesome demon-astronaut who, for decades, has manned a mega-spaceship called Pushpak 634A. It docks on earth every morning to pick up the newly-dead. Once it returns to its orbit, Prahastha prepares the dead for rebirth.

The principal male character's name evokes a fierce warrior - Prahastha was the chief commander of Ravana's army - but he is listlessly taciturn, going through the motions with clinical, detached precision. Such is his job that he avoids any communication that isn't absolutely essential to the daily ritual of seeing off the dead.

In effect, that means the only person he ever talks to - never directly but on a computer link - is ground control officer Nitigya (Nandu Madhav). The latter wakes Prahastha up every morning half an hour before touchdown so that he can slip into his overalls, pick up his toolkit and go forth to receive the day's cargo.

His serene, if unexciting, existence is disrupted when an enthusiastic assistant, Yuvishka (Shweta Tripathi), the product of an era of video logs and digital excess, is sent to lend him a helping hand. There is no love lost between the two to begin with, but when a bond develops between them it is deep and without the trappings of temporal affection.

At one point, Yuvishka asks Prahastha: What do you do the whole day? He replies: I wait the whole day (for the cargo). I heal, erase their memories and then do their transition. Yuvishka, on her part, triggers a transformation in Prahastha. The latter finds himself face to face with philosophical and metaphysical questions and, no less importantly, with his own suppressed emotions.

The role that Prahastha performs - it is called Post-Death Transition Services (PDTS) and is run under the aegis of the Inter-Planetary Space Organisation (IPSO) - is part of an epochal peace treaty that ended eons of hostility between humans and demons and ushered in an era of not just co-existence, but also active cooperation.

Prahastha can heal those that arrive from earth for the onward journey towards another shot at life. He can to boot erase their memories completely, but he cannot remove their physical scars. The new healer-demon who joins him to share his workload has stronger restorative abilities. Proof of it is provided when she heals the raw wound of a man with a knife on his back. He has been stabbed by a younger brother he raised like a son. Talk of human perfidy.

This fabulously off-kilter construct might have ended up being a single-trick pony. It does not because Kadav pushes the material into surprising directions that approximate the vagaries of life and death. She blends form, substance and physical backdrop with minimal effort and to maximum effect.

The film deals with the weighty themes of remembering and forgetting in a constantly shifting world where nothing can be taken for granted, as the people who die and end up in the spaceship's transition bay realize with a sense of remorse and utter vulnerability.

Among the cargo Prahastha receives are a 72-year-old magician who arrives with a few stage props, a man who has spent his life as a film extra and stuntman and wishes he is reborn as Salman Khan, an "international loneliness detective" who promises to rid his clients of fear and frustration, and an aggressive young man (played by Ritwik Bhowmik, now known for Bandish Bandits) who is beyond redemption.

The screenplay handles it all in a manner that alternates between the pensive and the playful, the profound and the provocative. Cargo carries its load with effortless ease, never losing its grip over the simple devices and direct methods that it employs.

Indian mythology and modern technology go head to head in the film, merging and diverging at will to create a quietly captivating miasma through which it reveals flashes of light. Cargo has been filmed on a limited number of sets but it never allows any sort of monotony to set in, thanks to the constant vibrancy of its vision.

Vikrant Massey and Shweta Tripathi are up to the task of walking the thin line between 'human' vulnerability and otherworldly certitude. The two actors, despite being in a largely make-believe setting, etch out characters that are tangible and emotionally engaging. Part of the credit for that should obviously accrue to the director.

Gravitas is mixed with darkly humorous diversions in Cargo. It is the film it is because the director keeps her feet on the ground as she lets her mind fly free. A real gem.