Cannes 2021: This year was still subject to social distancing rules 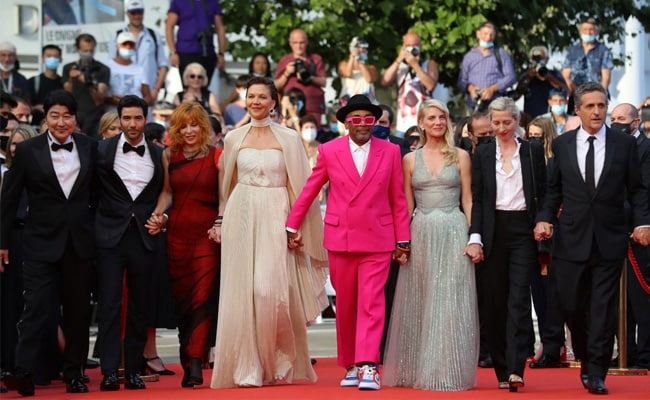 The Cannes film festival opened Tuesday and quickly rediscovered its heady mix of glamour, politics and controversy, with the added shock of stars kissing without masks. The world's biggest film festival fell victim to the pandemic in 2020, and this year was still subject to social distancing rules. While stars were allowed to walk the red carpet without masks, there was a strict no-kissing rule, but this was flaunted almost immediately as they started strutting up Cannes' fabled staircase to the festival palace.

Festival president Pierre Lescure couldn't resist giving two pecks on the cheek to Hollywood actor Jessica Chastain before repeating the offence with singer and former French first lady Carla Bruni. He then bowed to kiss French actor and jury member Melanie Laurent, star of Inglourious Basterds, on the hand. Even festival director Thierry Fremaux, who had insisted on the ban, allowed the maskless Korean director of Parasite, Bong Joon-ho, to give him a hug.

"Covid is still there, but it's a huge sense of relief and excitement" to be at Cannes, US star Adam Driver told AFP before the beautifully eccentric musical, "Annette", in which he starred alongside French actress Marion Cotillard, opened the festival.

Fellow Hollywood star Jodie Foster summed up the mood of a pandemic-hit planet as she received an honorary Palme d'Or for her stellar career from Spanish director Pedro Almodovar. "Lots of us have spent the year shut up in our little bubbles... confronted by suffering and anxiety and mortal fear. Yet here we are after a year like never before back together in our beautiful clothes. Have you missed the glamour? I have too," she joked.

She later declared the festival opened with Almodovar, US director Spike Lee and Bong, who won the last Palme d'Or in 2019.

'No morals, no scruples'

Spike Lee, who is the first black person to head the Cannes jury, had earlier set an unapologetically political tone. "This world is run by gangsters," Spike Lee said in response to an emotional appeal from a Georgian journalist about a recent crackdown on a Pride celebration in her country, which she blamed on Russian influence.

Spike Lee also stuck the knife into Donald Trump, who he calls "Agent Orange", and sported a cap reading "1619" - the year the first slaves arrived in the Americas. "Agent Orange, this guy in Brazil (President Jair Bolsonaro),and Putin are gangsters. They have no morals, no scruples. That's the world we live in," Spike Lee said.

As he led his jury up the red carpet, Lee wore an electric pink double-breasted suit, matching spectacles and colourful sneakers.

Annette tells the story of a celebrity couple and their mysterious child, the titular Annette. The stars sing their way through a story that began as an idea by Ron and Russell Mael, the eccentric Los Angeles pop duo known as the Sparks.

They brought Annette to Carax after meeting him at Cannes in 2013, and the result is a rock opera with musical styles ranging from danceable electro to classically inspired lyrical passages.

The stars do most of their own singing which, Cotillard told AFP, required "a major preparation effort in a very limited time". Her co-star Driver famously hates watching himself on screen and said the musical would be no exception. "My plan is to go in and when the lights go down, I run," Driver told AFP ahead of the screening.

He said he would try to find an empty office and sit out the screening while "playing with staplers" and making phone calls. Describing his usual technique, he said "Then I go back, and when the lights come up, I stand up, I pretend that I was there the whole time."

'I pretend that I was there'

This year, 24 films compete for the festival's top prize, the Palme d'Or. The directors vying for glory include perennial Cannes favourites such as Italy's Nanni Moretti with his new film Tre Piani, France's Jacques Audiard (Les Olympiades) and Thailand's master of the slow burn, Apichatpong Weerasethakul, with his English-language debut (Memoria).

Other contenders include Sean Penn, whose Africa-based humanitarian love story The Last Face bombed at Cannes in 2016; Iran's two-time Oscar winner Asghar Farhadi; and Russian director Kirill Serebrennikov, who is barred from leaving his country due to an embezzlement conviction widely seen as punishment for criticism of President Vladimir Putin.

The jury this year is mostly female, including US star Maggie Gyllenhaal, Canadian-French singer Mylene Farmer and French-Senegalese director Mati Diop. But with just four female directors in the competition, the festival's tendency to pick the usual (male) suspects of the arthouse elite is once again under scrutiny.

Only one woman has won the Palme d'Or in 73 editions of the festival - Jane Campion for The Piano in 1993.

Robert Downey Jr's Emotional Post After Death Of Father. It's OK To Cry