Can You Spot Anurag Kashyap In This College Pic?

"Those were the days," wrote Anurag Kashyap 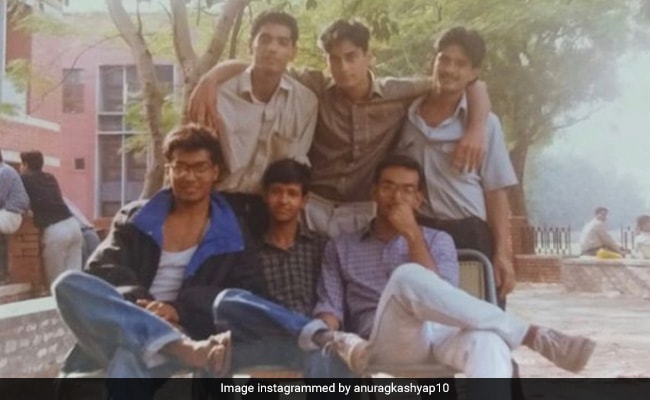 Throwback photos of Bollywood celebrities are always a delight and thanks to filmmaker Anurag Kashyap, we got hold of one on Wednesday. The Gangs Of Wasseypur director shared a rare throwback picture of himself from his college days, in which he can be seen posing with his "best friends." In the photo, Anurag Kashyap's lean physique makes it really difficult to identify him. Can you spot him? If not, here's the answer - Anurag Kashyap is the one wearing a blue-and-black jacket. He can be seen sitting on a chair. The photo was clicked when the director was studying in Delhi University's Hansraj College. Sharing the blast from the past, Anurag Kashyap wrote: "Those were the days... #hansrajcollege #delhiuniversity #bestfriends."

A picture from the Muhurat of my first film PAANCH in 2000.. with Anil Kapoor giving the muhurat shot. Spot Vikramaditya Motwane and @hansalmehta . Also Dudley Rajendran. With Padmini Kolhapure, @tejukolhapure @i_pankaj_saraswat_ @vjymaurya (who sent me the pic) @1fabehakhan , Ashok Thakeria , Suresh Singh and a very young Priyank Sharma

Anurag Kashyap is a director, producer, writer, as well as an actor. He made his directorial debut with Paanch and went on to direct several films such as Black Friday, Dev.D, Gulaal, That Girl In Yellow Boots, Gangs of Wasseypur, Manmarziyaan and others.