The Busan International Film Festival (BIFF) usually sees a host of stars and industry players from Asia and elsewhere attending. 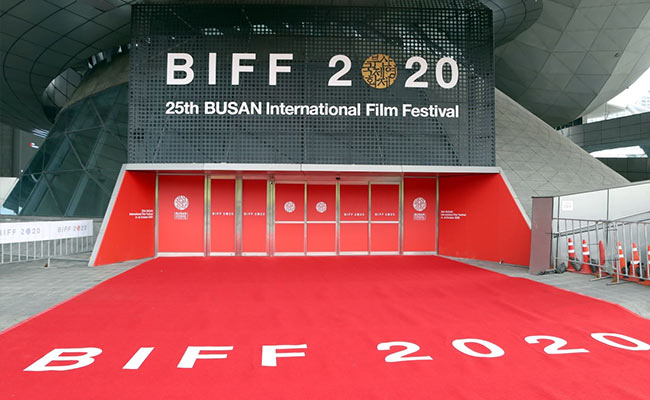 Asia's biggest annual film festival started in South Korea Wednesday at a fraction of its usual scale, but some movie fans will still be able to attend screenings despite the coronavirus forcing many events online.

The Busan International Film Festival (BIFF) usually sees a host of stars and industry players from Asia and elsewhere descend on the port city for 10 days of critical consideration and financial deal-making.

But strict conditions imposed this year because of the pandemic mean there will be no opening ceremony, and no red-carpet parades, after-parties or outdoor fan events.

The fact it is taking place at all, however, is a bonus, as many international festivals have gone online-only and some -- such as Cannes -- have been cancelled altogether.

Around 190 movies will be shown at this year's festival and only once each, compared to the typical 300-odd films played multiple times -- an 80 percent cut in total screenings.

Those attending will have to wear masks, while social distancing will be enforced by making available only a quarter of theatre seats.

"We think what's most important about film festivals is to screen movies at movie theatres, as cinema is an art form that requires big screens."

Organisers have scheduled some 45 public screening talks -- also far fewer than normal -- but featuring only South Korean filmmakers and actors.

South Korea imposes a strict two-week quarantine on most arrivals, making short visits impractical, so organisers have not invited foreigners -- although some will participate online.

The compromise has left some people dismayed.

"I've attended a number of online movie talks since Covid, and I have to say they are just dreadful," said filmmaker Kim So-young, a professor who has not missed an edition of BIFF in 10 years.

"You just can't connect with your viewers the way you do in theatres, especially after the lights are back on after a screening," she told AFP.

"There is a very special feeling that comes from knowing that you are with people who just finished watching your film."

Among 70 world premieres this year, the opening film Septet: The Story of Hong Kong, a multi-director anthology that pays tribute to the territory from the 1950s to the present.

Directed by Tsui Hark, Ann Hui, Patrick Tam, Johnnie To, Yuen Wo Ping, Ringo Lam and Sammo Hung, the movie honours the golden age of Hong Kong cinema, from the 1960s to the 1990s.

The territory was once the regional cinematic powerhouse, producing as many as 200 Cantonese-language films a year that were devoured by cinema-goers across Asia and beyond.

But since then, the city's movie studios have gone into decline, eclipsed by flashier and wealthier rivals in mainland China and South Korea.

"It was an era of 'one hundred flowers blooming' -- the free expression of art -- that nurtured numerous movie talents," production company Media Asia Film Hong Kong said in a statement.

Most BIFF components -- including judging, press conferences, film and project markets and discussion forums -- will still be held during the festival, but online.

"It will certainly be a different festival this year," Jason Bechervaise, a professor at Korea Soongsil Cyber University, told AFP.

"Had we not been in this situation, the festival would no doubt have a celebratory atmosphere given the success of Parasite and the subsequent attention the Korean film industry has had."