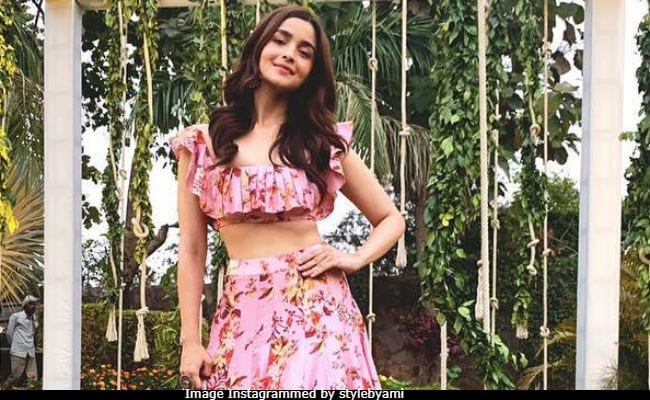 Alia Bhatt and her lehenga game! Uff, just too good, ya. We are totally crushing on Alia Bhatt's outfit changes at her BFF Devika Advani's big fat wedding festivities in the national capital. For the sangeet on Thursday evening, Alia skipped the traditional and opted for a floral printed lehenga with a ruffled neck choli. The dupatta was swapped for an uber-chic accessory like a potli designed by Deepa and Pranati Mansukhani. Styled by Ami Patel, Alia Bhatt's gorgeous outfit is from the collections of Anushree Reddy and if you wish to get a similar piece, be ready to shell out a bomb as it's priced at around Rs 89,000 on several websites. For the sangeet look, Alia Bhatt's chunky ring is from the Sangeeta Boochra Silver Centre.

Ami Patel has all details of Alia's stunning outfit but first, let's take a moment to admire this pretty lady:

For a day function, the 25-year-old actress opted for a sea foam blue lehenga and paired it with a bold strapless choli in yellow. This time, she opted for Anita Dongre because why not? Alia completed her look with big earrings from Amrapali and we want them too! Alia Bhatt's Anita Dongre lehenga is priced at around Rs 75,000 on the designer's official website.

next to you the sky's so blue

Alia Bhatt, as the happiest bridesmaid, is setting major bride squad goals! On the work front, the actress is currently basking in the glory of the success of her new film Gully Boy. She has Kalank and Brahmastra in the pipeline.