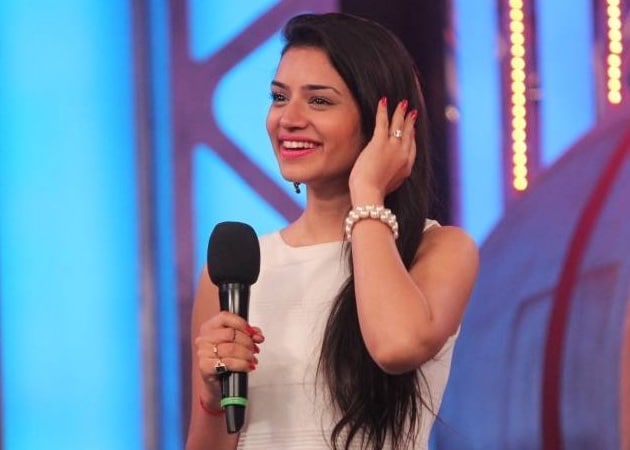 Sukirti Kandpal is the latest celebrity to be evicted from the celebrity game show. (Image courtesy: Bigg Boss)

TV actress Sukirti Kandpal, who was the latest celebrity to be evicted from controversial celebrity game show Bigg Boss, relieved actor Praneet Bhatt from his 'slave' status in the house as her parting gift for the Mahabharat actor.

Sukirti, who left the house after her two-week long stint in the premises, had developed a close bond with actors Aarya Babbar and Upen Patel. She also presented Aarya and Upen with the Hangover award for having a positive effect on her.

As her final act for the contestants she used her 'Bigg Bomb' privilege to replace one of the 'slaves' with another housemate in Praneet's favour. Sukirti elected RJ Preetam to take Praneet's place in that respect.

The 'slaves' in Bigg Boss' house are not entitled to use the luxurious facilities as the other members and are mostly at the disposal of other housemates. Diya Aur Bati Hum actor Gautam Gulati, who fell into a tight spot with the other members after his shouting match with Karishma Tanna during a task, is the other 'slave' in the house. Gautam, who had met with harsh behavior at the hands of other housemates post his fight with Karishma, will continue to be the 'slave' for a second consecutive week. Unfortunately for Gautam, he was also given the Kala Dhabba award by Sukirti as she had had a fallout with him recently.

Promoted
Listen to the latest songs, only on JioSaavn.com
During the weekend special episode, Salman Khan and previous seasons' contestants Kamya Panjabi and VJ Andy also deliberated that Gautam and Karishma's fight has been stretched a lot, and the housemates ganging up on Gautam has actually made him a hero for the public. Gautam was one of the three nominated contestants this week.

Will Salman Khan's chiding have an effect on the housemates and will they pull their act together? Watch this space for more updates on Bigg Boss 8.