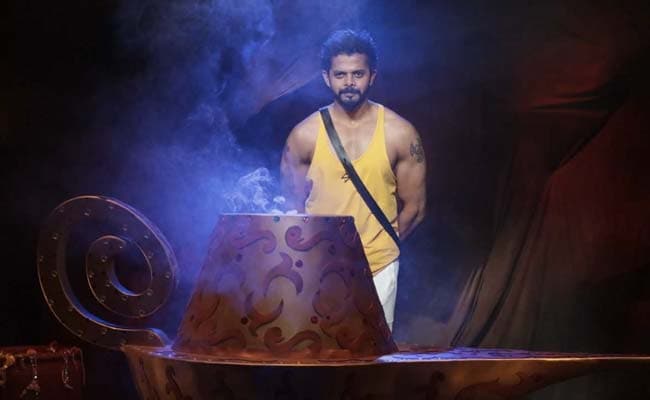 Sreesanth during the nomination task

This week's nomination task 'Jinn Ki Gufa' was surely not an easy one since the contestants had to give up their prized possession for the sake of the game. As a part of the task, contestants were called one by one to a make belief cave constructed in the garden area and there, the Jinn commanded them to convince one of the housemates to sacrifice something very precious to them. The first leg of the task was completed in the last episode, Karanvir Bohra gave up his most prized possession for the sake of the game. Tonight, it was Sreesanth, who was summoned to the cave, where the 'Jinn' commanded him to destroy Surbhi Rana's tissue letter which she had given. Sreesanth said that he was willing to get nominated for the task and refused to tear off Surbhi's hand-written letter. When Sreesanth does not give in to the requests of the Jinn, he forces him to ask Surbhi to do it.

Following Sreesanth, Romil entered the cave, where the Jinn commanded him to ask Somi to destroy all her family photographs. Does Somi give in to the Jinn's request to save Romil from nominations? Yes, she does.

After Romil, Dipika Kakar entered the cave, where the Jinn tells her to ask Sreesanth to shred two photos from his family photo album. After Dipika passed on the message to Sreesanth, he did not even take a minute to think over it. Sreesanth will do anything to save his friends and this gesture is proof.

Meanwhile, Bigg Boss reprimands Romil Rohit and Deepak for not abiding by the rules of the Bigg Boss. The trio have often been found dozing off to sleep during the day. Bigg Boss then gave Surbhi the right to decide that she can take away mattresses from any eight contestants of her choice.