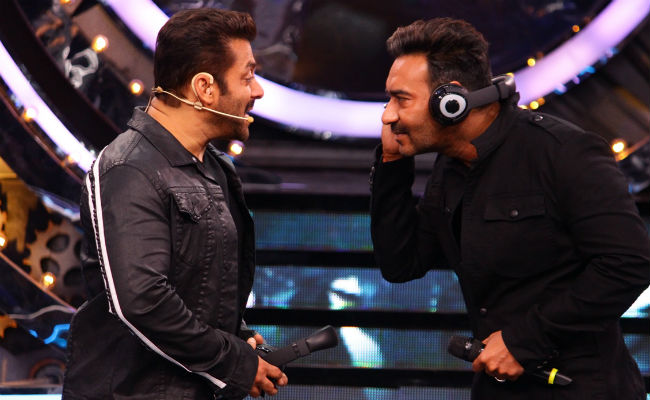 Bigg Boss 11, Weekend Ka Vaar: A still from the show

New Delhi: Salman Khan will return with a power packed episode of Weekend Ka Vaar on Bigg Boss 11 tonight. After Priyank Sharma's sudden elimination on Saturday's episode, the contestants who are awaiting their fate in the elimination round are Zubair Khan, Jyoti Kumari, Arshi Khan, Shilpa Shinde and Bandagi Kalra. However, amidst all the tension, it's the cast of Golmaal Again who lighten the mood in the Bigg Boss house. Ahead of their entry into the house, Salman was joined by actors Ajay Devgn, Tabu, Shreyas Talpade, Parineeti Chopra, Kunal Kemmu, Tusshar Kapoor and director Rohit Shetty on stage. Team Golmaal also had plenty of fun with the contestants and got Diwali gifts for everyone but they are not what you think.

The #GolmaalAgain gang is in the #BB11 House & they have some gifts for the contestants! Tune in tonight at 9pm! #WeekendKaVaarpic.twitter.com/pxC4CuFS6v

The cast and crew of Rohit Shetty's film enter the house to share some special advice with the contestants. For example, Parineeti handed over a mouth-wash to Arshi, who already has a reputation for being foul-mouthed. Sreyas Talpade asked Vikas Gupta to keep his temper in check, otherwise he'll have to get rid of all his friends on the show.

The #GolmaalAgain gang is in the #BB11 House & they have some gifts for the contestants! Tune in tonight at 9pm! #WeekendKaVaar#BBSneakPeekpic.twitter.com/NwLsjeRpL2

That's not it. Weekend Ka Vaar will also have a new task particularly for Arshi Khan and Sapna Chaudhary - who will battle in the Sultani Akhada.

Introducing #SultaniAkhada on #BB11 with a face off between #ArshiKhan & #Sapna! Who will win? Find out tonight 9pm on #WeekendKaVaarpic.twitter.com/slLgs3exeI

Salman Khan will also be joined by Pinky Padosan in a Karva Chauth special act. Pinky is actually a character played by actor Gaurav Gera on the show.

Two episodes of Weekend Ka Vaar is aired on each day of the weekend, with Salman Khan returning to host the show. Who do you think will be eliminated on tonight's show? Only Salman Khan will tell.
Comments
bigg boss 11october 8