Bigg Boss 11: Rani Mukerji will be a special guest on tonight's episode 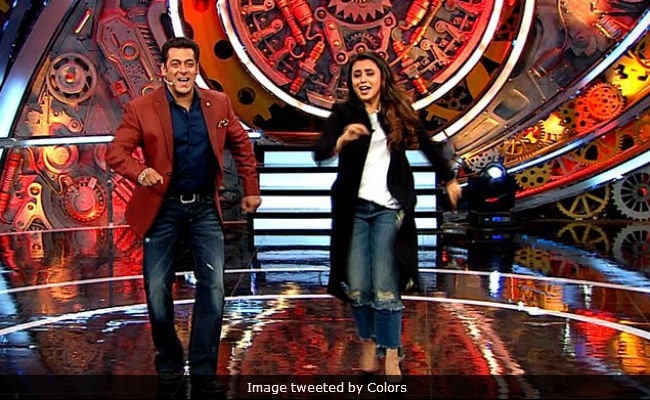 New Delhi: Chandi ki daal par sone ka more...Did this song remind you of something? Yes, get ready to see your favourite Jodi Salman Khan and Rani Mukerji re-unite on the sets of Bigg Boss 11 in today's Weekend Ka Vaar episode. Rani Mukerji, who is all set for her upcoming film Hichki, will join host Salman Khan in today's episode. The duo will dance to the beats of their famous song titled Chandi Ki Daal from Hello Brother and will take us back to the 90s. Salman and Rani will also indulge in a banter and Rani will advise Salman not to get married but to have a baby. "Humei Salman Khan ke bachche chaiye, unki shaadi mei humei koi interest nahi," Rani will say.

.@BeingSalmanKhan and Rani Mukherjee indulge in some fun banter on the #BB11 stage. Don't forget to catch them tonight at 9 PM on #WeekendKaVaar. pic.twitter.com/4u9Q64qytw

Then Salman Khan will remind the four nominated contestants - Hina Khan, Vikas Gupta, Shilpa Shinde and Luv Tyagi - that they are the least popular gharwale amongst the fans as the top two spots are already occupied by housemates Puneesh Sharma and Akash Dadlani. Salman will lash out at Akash Dadlani and will tell him that doing bang-bang or fighting with others doesn't make you a good entertainer.

Promoted
Listen to the latest songs, only on JioSaavn.com
Later, Rani will enter the house and will play a game with all the contestants, based on her upcoming film Hichki. Rani will give each topic to each gharwala and they will have to continuously speak for one minute (remembering our good old school days). Puneesh will play Luv's role and will enact Luv and Hina's friendship while Shilpa Shinde will become Hina.

Rani Mukherjee enters the #BB11 house to promote her upcoming movie #Hitchki and play a fun task with the housemates. Catch all the masti, tonight at 9 PM on #WeekendKaVaar. #BBSneakPeekpic.twitter.com/gsroogfN9H

Lots of fun awaits tonight also Salman Khan will declare who received the least number of votes in the live voting session in the mall. Excited much?