Hina Khan, Shilpa Shinde, Vikas Gupta, Luv Tyagi were taken to a mall as a part of the task where their fans voted for them live 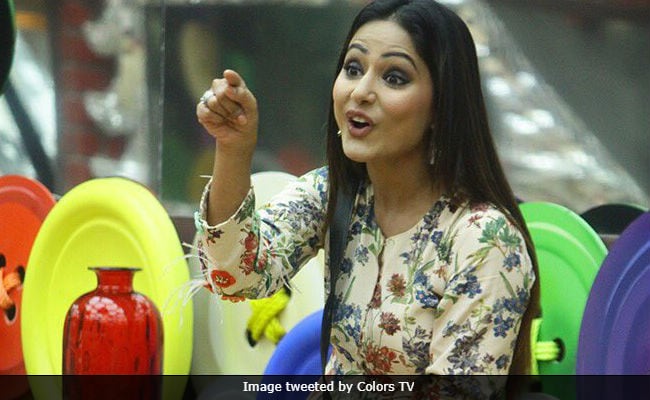 New Delhi: On Friday night's episode of Bigg Boss 11 the contestants were taken out of the Bigg Boss' house to a mall where their fans voted live. But the live interaction with fans was only for Vikas Gupta, Hina Khan, Shilpa Shinde and Luv Tyagi. Puneesh and Akash, who failed to perform in a task, were left behind in the house constructed in Lonavala. Ever since the episode aired last night, Hina Khan's fans on Twitter started trending "Hina deserves BB11 trophy." This may be because clips of Hina Khan's hair being pulled by the crowd went viral on Friday but there was no mention of the incident in the episode last night.

The housemates are greeted with an overwhelming crowd. Who will they vote for? Find out only on #BB11! pic.twitter.com/mtqG2V8VA4

With only few weeks left for the finale the contestants are getting edgy. In Friday's episode, as a part of a task, the contestants discussed each other's follies and Hina Khan faced the wrath of many contestants such as Vikas Gupta, who accused her "being in her own La La Land."

After this task, the contestants were taken to a mall where fans cheered and hooted for them. The contestants were kept at a distance from the crowd in a cage sort of set-up. They were mobbed when they exited their safehouse and that's when this happened:

This is sick!!
Shilpa fans were shaking hands with Shilpa n one fan pulled hina's hair!!

Promoted
Listen to the latest songs, only on JioSaavn.com
Disgusting! Shilpa was still busy in shaking hand with fans...Vikas protected Hina!
Such a Gentleman #VikasGuptaFTW#VikasGupta#BB11@TeamVikasGuptapic.twitter.com/Srw4Z3nmSU— Garima (@IamGarimaS) January 4, 2018

Watch this space for updates on Bigg Boss 11