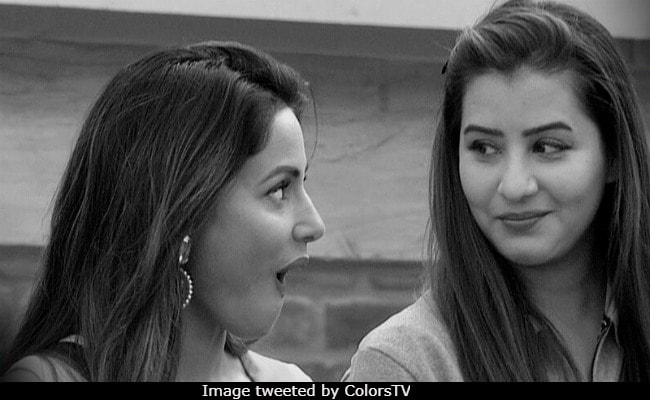 Bigg Boss 11, January 1: A still from the show (courtesy ColorsTV)

New Delhi: Monday's episode of Bigg Boss 11 took off with a task - Bigg Boss asked the contestants to rank themselves based on overall performance on a scale of 1 to 6 - but the trick was, the housemates were to unanimously agree on each of their positions. Aakash Dadlani becomes to the first one to claim the top spot - a fact that was contested by Vikas Gupta and Hina Khan. Vikas argued that Shilpa Shinde should be no. 1 because she has had a "beautiful" journey while Hina Khan put forward her views saying the top spot belongs to either Shilpa or herself.

Puneesh also shared his point of view saying he doesn't see himself placed anywhere below the first three positions. Puneesh also came up with a strong point, that resonated with all the housemates - he said that the celebrity contestants - Hina Khan, Shilpa Shinde and Vikas Gupta - have been privileged with an added advantage that they already had a fan following when they joined the show.

Bigg Boss has an exciting activity for all the housemates. Find out what it is only on #BB11! pic.twitter.com/V1D97GjgRL

Unable to reach a conclusion, the housemates sat down for a meeting of sorts. Shilpa declared that she and Hina should take up the 5th and 6th positions while the Luv Tyagi, Aakash and Puneesh can decide their places amongst themselves. Aakash, who appeared overtly enthusiastic about occupying the top spot, declared he will place himself in the first position, Puneesh will take the second and Luv will be third. Shilpa took the fourth spot while Hina stood in the fifth place and Vikas was the last one in the order.

At this point in time Bigg Boss announced that this was the task for nominations and barring the first two, the remaining housemates are nominated this week. Previously, Hina had teased Aakash saying that he would definitely be nominated this week and now it was Aakash's turn to take revenge. He went about the house celebrating, something which appeared to disgust Shilpa.

Akash Dadlani and Puneesh Sharma make it to the top 2 rankings and are safe this week. Did you see that coming? #BB11. pic.twitter.com/yRjdtpgy3v

Neither Shilpa nor Hina were pleased with the way the nominations played out this week. Shilpa even had a heated conversation with Aakash saying he doesn't deserve to win while Hina and Vikas discussed that they should have fought for better positions in the day's task.

Do you think Aakash and Puneesh deserved to be safe this week? Tell us in the comments below. Watch this space for more updates on Bigg Boss 11.
Comments