Bigg Boss 11: Deepika Padukone And Ranveer Singh Have No Scenes In Padmavati, She Told Salman Khan

"It is strange because we ( Deepika and Ranveer) are there in Padmavati, but have not worked together as there are no scenes," says Deepika 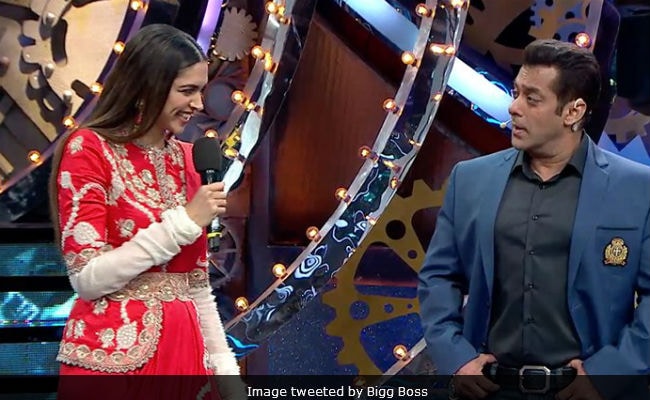 New Delhi: Actress Deepika Padukone, Sunday night's special guest on the Salman Khan-hosted episode of reality show Bigg Boss 11, grabbed the opportunity to set the record absolutely straight on her new and beleaguered film Padmavati. Critics of the film have expressed (rather violently) concern that Padmavati wrongly attributes a romantic relationship between Rani Padmini, played by Deepika, and Sultan Alauddin Khilji, played by Ranveer - legend says that Padmini committed jauhar or self-immolation to escape the invading Khilji. In response to a question from Salman, Deepika said on Bigg Boss 11, "It is strange because we (she and Ranveer) are there in the movie, but have not worked together as there are no scenes."

Deepika's comment reiterates what Padmavati director Sanjay Leela Bhansali has repeatedly said. It is, however, unlikely to pacify those opposing Padmavati, which has been postponed indefinitely from its scheduled release date of December 1. The Censor Board last week rejected the film's application for certification on the grounds that it was 'incomplete.'

Salman Khan, star of Mr Bhansali's previous films Khamoshi and Hum Dil De Chuke Sanam, has already backed Padmavati earlier, saying that the director's films never have 'vulgar and disgusting content' and that he 'cannot portray anyone in a bad light.'

Amarinder Singh and Shivraj Singh Chouhan, chief ministers of Punjab and Madhya Pradesh, have lately added their voices to the protests against Padmavati, which has been the focal point of controversy ever since a fringe Rajput group called Karni Sena attacked the film's set and assaulted Sanjay Leela Bhansali when they were shooting in Jaipur in January.

Promoted
Listen to the latest songs, only on JioSaavn.com
Actor Shahid Kapoor, who plays Rani Padmini's husband Rawal Ratan Singh of Chittor, told news agency ANI today, "I don't think there is anything in the film that is unacceptable or not in good taste. Eventually, Padmavati will come out in full force."

Shahid is a new addition to the team of Deepika Padukone, Ranveer Singh and Sanjay Leela Bhansali who previously collaborated on Ram-Leela and Bajirao Mastani.