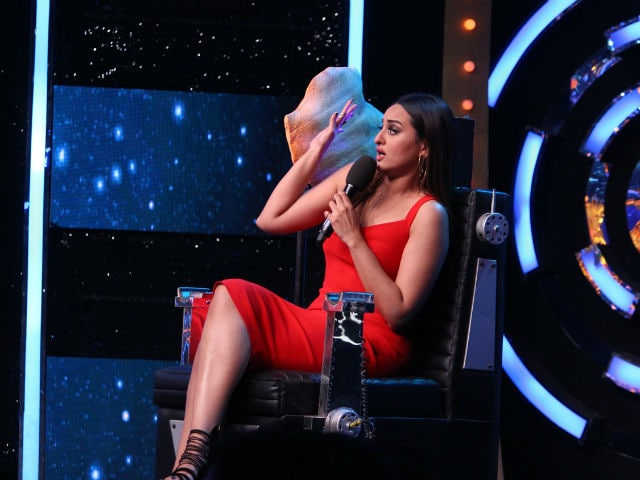 New Delhi: After the highly-dramatic episode of Saturday's Weekend Ka Vaar, where Salman Khan asked Priyanka Jagga to leave the show because of her intolerant behaviour, the contestants of Bigg Boss 10 will today get some sweet surprises since it's Christmas. Bollywood actors Sonakshi Sinha and Manish Paul will enter the house and lighten the mood of the contestants with fun-filled games, followed by a Christmas party. Sonakshi will ask the contestants to write a message for their favourite housemate and read it aloud. Monalisa will write a message for Manu Punjabi thanking him for his love and support while Gaurav Chopra will thank Bani J for being his support system throughout.

.@sonakshisinha comes up with an interesting task- spin the bottle! But, with a twist which housemates didn't see coming! #BB10WeekendKaVaarpic.twitter.com/uewyMQ2v6M

Next, Sonakshi will play spin the bottle game, where in the contestants have to guess who said the following statements about them. In the first round, Bani will have to guess who called her hypocrite, Nitibha Kaul or Lopamudra Raut. Bani will take Lopamudra's name which will be a wrong answer. In the next round, Monalisa will have to identify the person who said, "Agar Mona apne Sunny Leone image follow karna chahti hai toh kyu ro rahi hai". Meanwhile, Manu, Manveer and Bani will be called for a quick rapid fire round by Manish. The game will reveal many hidden emotions and opinions. After the game, Sonakshi and Manish will make an exit from the house.

Housemates give each other a sweet treat on Christmas while being blindfolded which will leave you in splits! #BB10WeekendKaVaarpic.twitter.com/XIEtuh5tuk

Promoted
Listen to the latest songs, only on JioSaavn.com
Both of them will also make an appearance onstage with Salman Khan. Sonakshi will perform with Salman and will further play a game called 'Thapad Se Darr Nahi Lagta', introduced by the actor. Salman tells her that he will ask few Bollywood questions from her and she will have to guess the right answer. Failing to do so, she will get a thappad. Salman will have a great time with Sonakshi and Manish.

Before Salman will sign off, the contestants will surprise the actor, who will soon turn 51, with a performance on his hit songs.