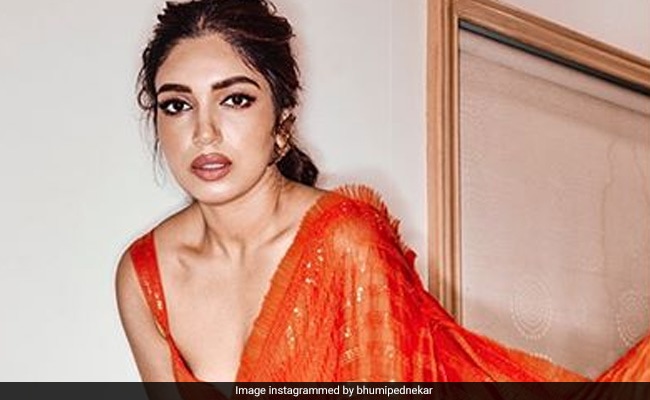 Actress Bhumi Pednekar found herself in a chatty kind of a mood on Friday morning and participated in an interactive session with her fans. Bhumi, who is known for her signature sense of humour, appeared to share her wedding plans of sorts when a love-struck fan tweeted about his admiration for the 30-year-old actress. Replying to the fan's tweet, which said being an actress, Bhumi would perhaps never get married to a non-celeb, the Pati Patni Aur Woh star said that a possible wedding is not on her mind right now and that she would rather prefer busying herself with more and more acting projects. This is what she wrote in a tweet: "Celebrity or no celebrity shaadi ke chances abhi kam hi hai... but I won't let you miss me... will keep coming to the big screen as often as possible."

Celebrity or no celebrity shaadi ke chances abhi kam hi hai... but I won't let you miss me... will keep coming to the big screen as often as possible https://t.co/Wf9zyP3DfW

Aaj ki duniya hi aisi hai! Give her some more love tonight by cooking her a meal. Comfort her and then confront her #VedikasLoveLine#PatiPatniAurWoh#6thDecemberhttps://t.co/UUIElVvraW

On the big screen, Bhumi Pednekar, however, plays the role Kartik Aaryan's wife in Pati Patni Aur Woh, which is a remake of the 1978 film of the same name and theme of adultery. Kartik plays the 'pati', Bhumi playing the 'patni' and Ananya Panday features as the 'woh' in the movie. Directed by Mudassar Aziz, Pati Patni Aur Woh is slated to hit screens on December 6.

This year, Bhumi Pednekar was also seen in Saand Ki Aankh and Bala.