Bhoot Police Review: Not the type of film that will tickle every palate, but Saif Ali Khan, when he is on a roll, is a delight. It is no mean feat that Arjun Kapoor keeps pace with him. Jaaved Jaffrey has a longish cameo that he makes the most of. 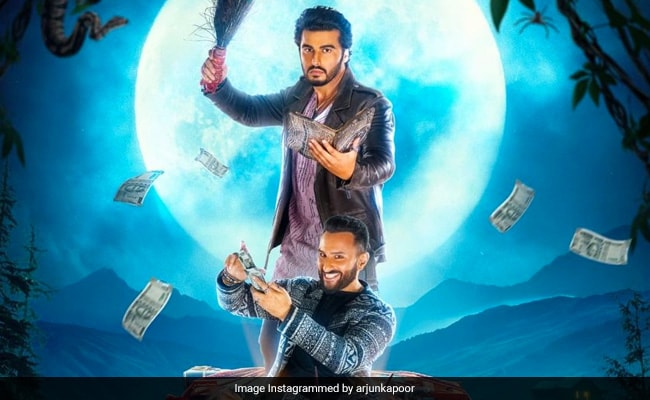 Pavan Kripalani's Bhoot Police, a horror comedy that keeps its cards close to the chest until it is well into the second half, opens, believe it or not, with an Abraham Lincoln quote. It, however, quickly proceeds to lay the ghost of America's 16th President to rest because he obviously isn't central to the zany plot. There is nothing in this crazy, breezy caper film about a pair of on-call ghostbusters that one would associate with anything that Lincoln might have had in mind when he said: "To believe in things you can see and touch is no belief at all but to believe in the unseen is a triumph and a blessing."

Not much in Bhoot Police is instantly believable, but what we see in the film is amusing enough for us not to be ruffled by its trifling with fearsome apparitions. Out on Disney+Hotstar, the film is woven around constant banter over what to believe and what not to as two brothers, Vibhooti Vaidya and Chiraunji Vaidya (Arjun Kapoor), sons of a famed Tantric exorcist Ullat Baba, bicker incessantly. They do not see eye to eye on the purpose of voodooism.

Two brothers at odds with each other run into two sisters who have nothing in common - one wants to protect the legacy of her father, the other dreams of returning to London and living it up. The complications that arise trigger a war between superstition and scepticism.

Vibhooti is an unapologetic charlatan who thrives on exploiting people's fear of the unknown for pecuniary benefit. Inspector Chedilal (Jaaved Jaffrey) is in pursuit of the guy because he has an old score to settle with the family.

Chiraunji, in contrast, is deadly serious about his dead father's teachings and sees himself as worthy inheritor of the spectral arts the family has practised, he reveals at one point, for seven generations. Kuch toh logic lagao, Vibhooti keeps saying to his younger brother although he is fully aware that they aren't in the business of logic. Neither is the film.

Despite their divergent worldviews, the brothers always hunt in a pair. A van that doubles up as a home-on-wheels takes them wherever they are needed. The film opens in a desert mansion where a girl is believed to be possessed by the spirit of her grandfather. "Kaali urjaa hain yahaan (There is dark energy here)," says the younger brother as they alight from their vehicle outside the house. That is a prognostication he will make on several subsequent occasions.

What transpires as the two men confront the young girl (Yashaswini Dayama) and the spirit that has taken control of her gives Vibhooti more reason to pooh-pooh the existence of ghosts. Chiraunji, however, is unable to let go of his faith in the power of the tattered little book of otherworldly knowledge that his father bequeathed to him.

The siblings end up in a tea estate in Dharamshala at the behest of Maya (Yami Gautam). She needs their help to rid the village of a kichkandi, an evil and stubborn spirit of the mountains, that has been affecting productivity at her loss-making factory. The workers leave before sunset every day because they are scared of being waylaid by the ghost in the dark.

Speaking of the dark, Bhoot Police, shot by Jaya Krishna Gummadi, makes very effective use of dimly-lit spaces, both interior and exterior, and of lights piercing the mist and casting shadows, to create the ambience of an irreverent, hallucinatory ghost story that is enlivened by a resolutely tongue-in-cheek script (written by Kripalani, Pooja Ladha Surti and Sumit Batheja) that recalls and sends up many of the conventions that usually go into a big-screen scare fest.

Is Bhoot Police consistently witty? Maybe not, but it does have its share of genuinely funny scenes and exchanges. One might quibble that the quality of the throwaway one-liners is erratic, but with Saif Ali Khan bringing his flair for comedy to the act of delivering the verbal punches with a straight face, parts of Bhoot Police are an absolute hoot and a half.

A couple of his scenes with Jacqueline Fernandez, playing Maya's sceptical sister Kanika, who has no patience for the two handsome exorcists who have been summoned to the estate by Maya, are diverting because quite a few of the puns hit home.

Kanika asserts that nepotism and andh vishwas (blind faith) are the nation's undoing. Vibhooti and Chiraunji are guilty of benefitting from the former and peddling the latter. She also describes the two siblings as "bloody amateurs" given to conning the gullible with their "fraud vidya".

In one scene, Saif's character asks Fernandez's Kanika if she knows what aas (hope) means. I do, she says and is quick to warn him of a kick on the rump. In another scene, it is the girl's turn to ask a question. She wonders if she is Vibhooti's "type". The man replies: "Main toh jagat premi hoon, all type is my type (I'm a global lover, all types are my types)." If you that is funny enough for you, the film has other scenes that play out in a similar vein.

Bhoot Police may not be the type of film that will tickle every palate, but Saif Ali Khan, when he is on a roll, is a delight. It is no mean feat that Arjun Kapoor keeps pace with him. Jacqueline Fernandez contributes her mite to the mirth, while Yami Gautam plays a steady hand until matters take a ghastly turn in the film's last lap.

Jaaved Jaffrey has a longish cameo that he makes the most of. Rajpal Yadav and Girish Kulkarni put in fleeting appearances that are gone in a flash. Jamie Lever and the late Amit Mistry (in probably his last film role) play supporting roles that suffer for want sufficient attention from the screenwriters.

It is in a way advantageous that Bhoot Police does not set the bar overly high. Better still, it does not take itself seriously at all notwithstanding the fact that it invokes Abraham Lincoln before the romp begins. So, all that the film needs in order to be entertaining is a passable script and a bunch of actors who know exactly what they are in this riotous rigmarole for. It has those two things and a little more. At a stretch, Bhoot Police, powered by Saif Ali Khan, is fun while it lasts.