Beyonce's Vogue Cover Is Historic But Not Iconic 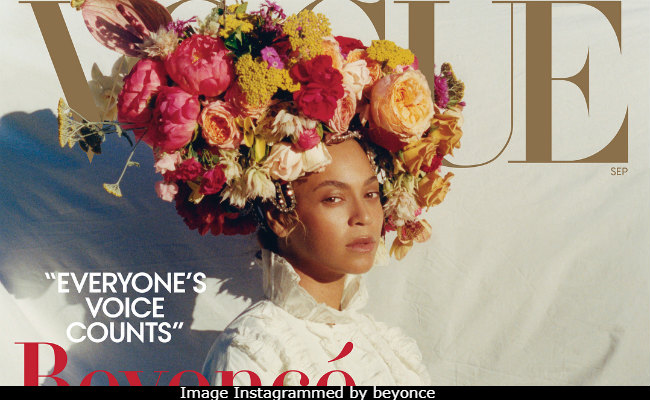 Beyonce on the cover of Vogue (courtesy beyonce)

Beyonce's latest Vogue cover has been birthed into the world, and it is lovely. Which is a compliment. It's historic because it's the first cover shot by an African-American photographer.

As a fashion image, it's neither surprising nor particularly memorable. After all, giant floral headdresses are having a moment.

There are two versions of the Vogue cover, one in which Beyonce has donned a long ivory shirtdress from Gucci and an elaborate floral headpiece crafted by the British firm Rebel Rebel, and another in which she is wearing a multicolored, tiered dress from Alexander McQueen. It's the former image that has, by far, the greatest resonance. It's the picture that hints at emotion.

The image recalls the aesthetic in the performer's groundbreaking video opus Lemonade, with its lyrical visual references to plantations, slavery and Julie Dash's Daughters Of The Dust. For all the styling effort that went into the picture, from the intricacies of the dress to the grandeur of the headpiece, the photograph itself has an enticingly slapdash, fuzzy imperfection. In this era of high-definition everything, Beyonce herself is almost blurry. It's like the viewer is looking at an image of her on an rabbit-eared antenna TV from the 1960s. The shadows are harsh; the fabric backdrop is rumpled. In many ways, it looks like a test shot snapped before the final, glossy, impeccable one is taken. The message in photographer Tyler Mitchell's work is that the viewer is on-set and in-the-moment.

His technique is powerful. He situates the viewer face-to-face with Beyonce in a way that feels pre-digital. But then. What? Beyonce offers up a sidelong glance that's part Mona Lisa and part proud, aloof, self-confident, regal black woman. She offers up the Beyonce brand. And while society has not reached a point at which the full humanity of black women is taken as a given and this full-throated message of self-worth bears repeating again and again, it does not negate the sense of Beyonce deja-vu.

This is stripped-down Beyonce. It's an alternative to the glamorous star in the mermaid gown, the new age feminist in the stark leotard, the gritty street-wise chick in athleisure-wear and cornrows and the earth mother in a gilded crown. In the magazine, the singer notes that she wanted to be photographed as natural as possible to underscore the importance of body acceptance. "I think it's important for women and men to see and appreciate the beauty in their natural bodies. That's why I stripped away the wigs and hair extensions and used little makeup for this shoot."

The suggestion is that by shunning fake hair and mascara, some truth is revealed. But no. Nothing is divulged. It's simply a retelling of the same story with different costumes and more interesting lighting.

Mitchell's work is a milestone in the magazine's 126-year history. Vogue also reports that, at 23, Mitchell is also among the youngest photographers to shoot a cover. Mitchell has worked for the Vogue brand before, photographing a story earlier this year on gun control activists for Teen Vogue. The youth-focused, digitally rooted magazine, particularly under former editor in chief Elaine Welteroth, gained a reputation for having an inclusive, socially conscious sensibility. And Vogue.com, which has a short feature on Mitchell, is notably more diverse than the print publication.

Mitchell was among a handful of photographers Vogue editors suggested for the Beyonce story and, recognizing the possibility of making history, the singer selected him. A host of stories and social media chatter have been devoted to the amount of influence and control Beyonce was allowed over the fashion spread. Her longtime collaborator Kwasi Fordjour styled the shoot. But Vogue veteran Tonne Goodman served as the fashion editor. Beyonce and Vogue's editor in chief, Anna Wintour, mutually agreed on the images that were ultimately published.

Any control Vogue extended to its cover subject did not reveal itself in the fashion she models. Beyonce wears brands that have a regular presence in the pages of the magazine: Gucci, Valentino, Alexander McQueen, Louis Vuitton, Dior and Philip Treacy. The freshest name is Wales Bonner. Helmed by London-born Grace Wales Bonner, it's a menswear label inspired by African and Afro-Caribbean cultural history. Bonner, who is biracial, crafted a custom bedazzled white pantsuit that Beyonce wears with her hair plaited in long, thick cornrows.

There is a bit of sameness to the images. In each picture, Beyonce has a similar expression: distant, stoic . . . a hint of froideur. In more than one, she poses with her legs akimbo, claiming her space in her own version of man-spreading. Ultimately, her level of control mostly reveals itself in her non-interview. She offers up a series of statements - "as told to" - Jezebel culture editor Clover Hope on topics chosen by Beyonce. She believes in opening doors for other people of color. She has matured a lot since her 20s, discovered slave owners in her ancestry, found motherhood to be a great responsibility and was really proud of her performance at Coachella. She also had an emergency Caesarean to deliver her twins; the recovery was challenging; her body is different and, that's okay.

There have been countless photographs of Beyonce. Many have been stunning, including the ones taken by Mitchell. But the iconic performer does not have a body of iconic portraits - photographs in which independent observers are able to cast her in a larger cultural context. That's a shame because photography has the ability to capture the essence of a subject for the historical record in a way that video does not. A portrait allows the eye to linger, to engage and to assess. It is the decisive moment. And that is beyond Beyonce's control.