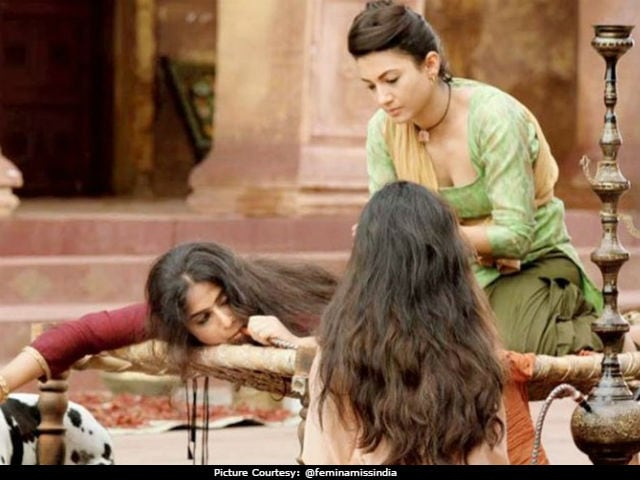 New Delhi: Actress Vidya Balan, who is known for getting deep into the skin of the characters that she plays on screen, has unveiled the first poster of her upcoming movie Begum Jaan. It is the Hindi adaptation of 2015 Bengali film Rajkahini, which dealt with the Partition. Begum Jaan shifts the scene from Bengal to Punjab. The first poster of the film is intense and intriguing and was heralded by a teaser that was earlier released by Vidya Balan on social media. In this proper look, the 38-year-old actress can be seen sitting in a chair in a commanding position, with a hookah in her hand. The poster has the caption, "My Body. My House. My Country. My Rules." And the subtitle states, "When Freedom Fought Independence..."

Begum Jaan> also stars Naseeruddin Shah, Ila Arun, Gauahar Khan, Pallavi Sharda and Rajit Kapoor in pivotal roles. Vidya Balan plays the title role of a brothel madam in Punjab during the Partition of 1947. In the original movie, the lead role was played by Rituparna Sengupta. Begum Jaan, which is directed by Srijit Mukherji and produced by brothers Mahesh and Mukesh Bhatt is slated to release on April 14. The film's music has been composed by Anu Malik.

Promoted
Listen to the latest songs, only on JioSaavn.com
Mahesh Bhatt described the movie on Twitter saying: "What a woman! She will take you to a place in your heart to which you will never go." Pallavi Sharda posted the first look with the caption, "Hamari begum jaan ko milna zaroor!"

Vidya Balan, who recently told NDTV that Begum Jaan is very special to her as it is a "badass movie," was last seen in the 2016 thriller Kahaani 2: Durga Rani Singh. The actress will also be seen in Tumhari Sulu later in 2017. Begum Jaan marks the debut of the Rajkahini director Srijit Mukherji in Hindi cinema.