Actor Riteish Deshmukh is gearing up for the release of his film Bank Chor, co-starring Rhea Chakraborty and Vivek Oberoi 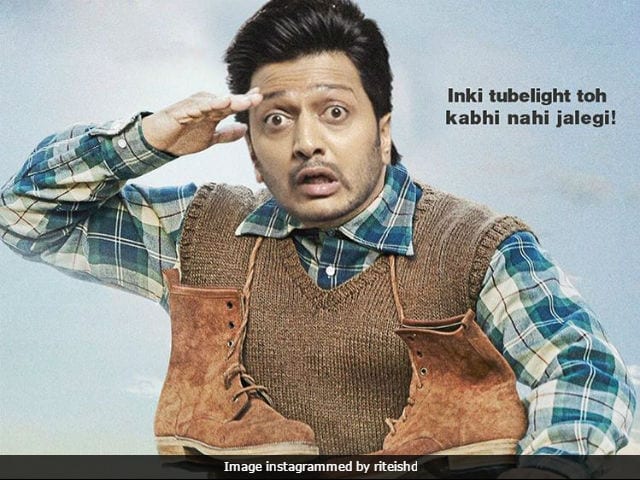 New Delhi: Actor Riteish Deshmukh is gearing up for the release of his film Bank Chor, co-starring Rhea Chakraborty and Vivek Oberoi. The 38-year-old actor is actively promoting his upcoming movie on social media but with a twist. Riteish, who portrays the role of a thief in the film, has stolen posters from popular Bollywood and Hollywood films. In the posters, the Masti actor has morphed the faces of the lead stars with his own. From Salman Khan's much awaited film Tubelight to Shah Rukh Khan and Kajol's Dilwale Dulhania Le Jayenge, series of spoof posters shared by Riteish Deshmukh are sure to make you ROFL.

Riteish first morphed the poster of Salman Khan's film Tubelight which is slated to release on June 23, two days ahead of Eid. The Ek Villain actor announced that Bank Chor will hit the theatres a week before Kabir Khan's film.

Check out the other hilarious posters shared by Riteish Deshmukh below:

Worked out for so many years trying to get my body to look like @iHrithik finally found a way. #AbsMilengeNaDobara#ChoriKaPoster#BankChorpic.twitter.com/xj2QCrUEpL

Bank Chor has been directed by Bumpy and produced by Y-Films' Ashish Patil and YRF's Aditya Chopra. The film is scheduled to release in theatres on June 16.

On May 9, the makers of Bank Chor unveiled the hilarious trailer of the film which was praised by actors like Bhumi Pednekar, Taapsee Pannu and Gurmeet Choudhary.

Promoted
Listen to the latest songs, only on JioSaavn.com
Watch the trailer of Bank Chor here:


Riteish Deshmukh was last seen in 2016 movie Banjo, co-starring Nargis Fakhri. After Bank Chor, he will feature in Marathi movie Mauli, directed by Nishikant Kamat. The Apna Sapna Money Money actor will also be making a film on Maratha warrior Chhatrapati Shivaji. The movie will reportedly be helmed by Ravi Jadhav.