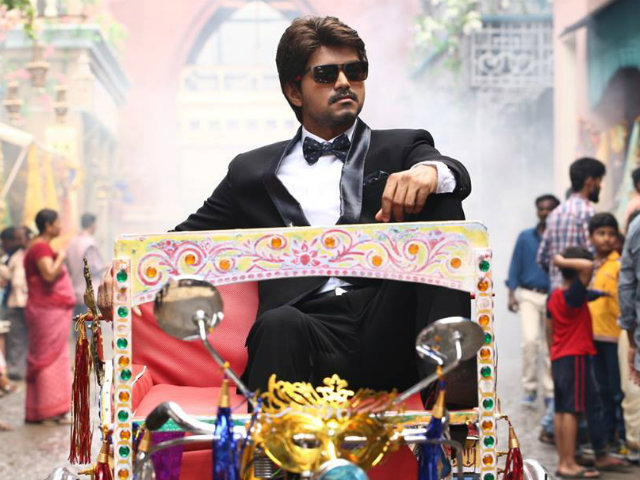 Bairavaa Box Office Collection: Vijay in a still from the film

New Delhi: Tamil star Vijay's new film Bairavaa has cashed in on the Pongal weekend overseas, making Rs 1.96 crores in USA, reports trade analyst Ramesh Bala. This is Vijay's third biggest opening after Theri and Kaththi. He also placed weekend figures for the film in Norway and Malaysia at Rs 19.03 lakhs and Rs 4.88 crores - the last puts it ahead of Theri. The film is the eighth biggest Tamil opener in Malaysia, a list topped by Rajinikanth's Kabali. Vijay's Kaththi is placed third. Bairavaa, which released worldwide on January 12, co-stars Keerthy Suresh and Jagapathi Babu, and is directed by Bharathan. Ramesh Bala tweeted:

Bairavaa, which had the working title Vijay 60, stars the actor as a a bank collection agent, the eponymous Bairavaa. He falls in love with a medical student, played by Keerthy Suresh, after meeting her at a wedding. The pair team up against PK, a corrupt and murderous politician played by Jagapathi Babu.

Promoted
Listen to the latest songs, only on JioSaavn.com
Reviews of Bairavaa praised Vijay's performance but not the film itself. Writing for news agency IANS, critic Haricharan Pudipeddi wrote: "It is appalling that Vijay chose to star in a film like Bairavaa when he is already on the right track with projects such as Thuppakki, Kaththi and Theri, his recent best commercial outings which appealed to both audiences and critics alike. Bairavaa only works in parts like many of his previous films and even some select moments - which you can find only in the first half - don't quite make you overlook the film's biggest flaws, which are its length and pace."

Vijay has a second release coming up this year. The film is currently being made under the working title Vijay 61.