BAFTA Awards: Boyhood, The Theory of Everything Top Winners 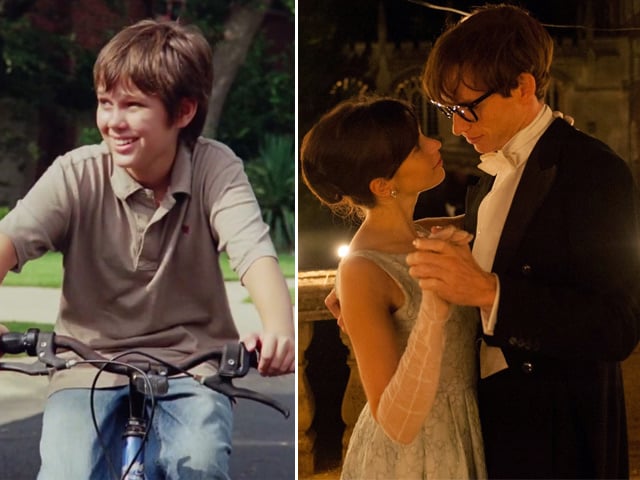 A still from Boyhood and The Theory of Everything

Thee American coming-of-age tale Boyhood, filmed over 12 years, won a BAFTA for best film on February 8 but the British awards ceremony was dominated by the Stephen Hawking biopic The Theory of Everything.

The British star, who is hotly tipped for Oscar glory later this month after already winning a Golden Globe, thanked Mr Hawking and his family "for reminding me of the great strength that comes from the will to live a full and passionate life". ( BAFTA 2015: List of Winners)

"Our dream as actors is to tell interesting stories about interesting people and they don't come more interesting than this," he said.

On the red carpet, Eddie said he had been "galvanised" by the hope that the film would raise awareness of Hawking's condition and had been to a clinic for four months to prepare for the role.

The awards this year favoured sensitive portrayals of illness and simple emotions and gave a lifetime achievement prize to director Mike Leigh, who is famous for his down-to-earth portrayals of working class life. (In Pics: Julianne, Nimrat, Reese Steal the Show at BAFTA Red Carpet )

Boyhood is a family drama that follows a six-year-old boy, Ellar Coltrane, as he grows up and also features Ethan Hawke as his father.

Ellar said it showed "the simplicity of human interaction", adding: "It was really scary to release something so close to us".

Best Actress went to US star Julianne Moore for Still Alice - a painstaking portrayal of a professor diagnosed with Alzheimer's disease.

Julianne broke down as she thanked her family in her acceptance speech.

Five nominees - Eddie Redmayne, Benedict Cumberbatch, Felicity Jones, Keira Knightley and Rosamund Pike - are also Oscar hopefuls, part of what has been described as a "British invasion" of Hollywood.

Felicity, who is still waiting for her big break, was nominated for her role as Mr Hawking's wife Jane in a film that concentrates on their love story as students and the beginning of his disease.

Rosamund said her role in the thriller Gone Girl covered "all facets of being a woman, to be sort of sexy and fun-loving, to be manipulative, to be devious, to be challenging, to be angry."

The awards were held in London's Royal Opera House and Hollywood star Tom Cruise, ex-footballer David Beckham and Mr Hawking himself were among the presenters.

But the jury snubbed The Imitation Game starring Benedict, which had received nine nominations.

The documentary Citizenfour about US intelligence leaker Edward Snowden won a BAFTA but there was no-one to pick up the award as director Laura Poitras is afraid of being prosecuted in the UK.

Mr Downey quoted from a Chaplin song saying: "Smile, though your heart is aching!"

Mr Hawking presented an award for best special effects, joking that he was not only more intelligent but also "better-looking" than the night's host, comedian Stephen Fry.

Benedict, who plays World War II codebreaker Alan Turing, said the role of a man persecuted for his homosexuality had become a "cause" and a "real passion" for him in the course of filming.

The actor has signed a petition for the thousands of men who were prosecuted under anti-gay laws in Britain only repealed in 1967 to receive a pardon like the one given decades later to Mr Turing.

At a pre-ceremony party in Kensington Palace, the London home of Prince William and his wife Kate, Benedict praised the new wave of British cinema.

"Britain has had a great year across the board, across writers, producers, actors and directors. It's a very, very good time," he said.

The only cloud in the run-up to the BAFTAs was a controversy over the biopic Selma about Martin Luther King starring British actor David Oyelowo.

David said the fact that the film had not been nominated sent "an odd message" but the British Academy said the movie was delivered too late.

Promoted
Listen to the latest songs, only on JioSaavn.com
Complete list of Winners: