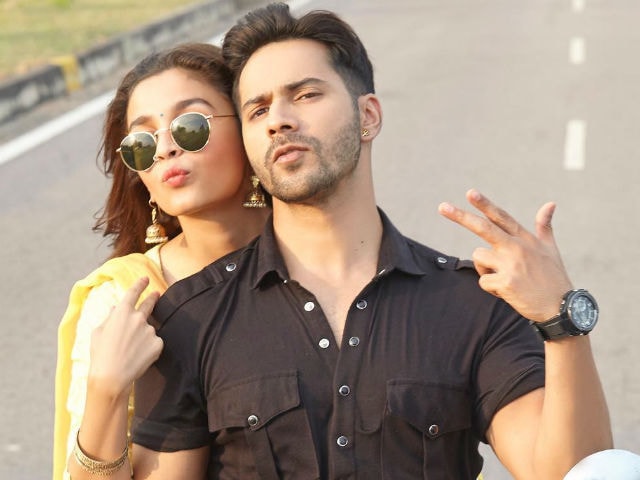 Badrinath Ki Dulhania: Varun Dhawan And Alia Bhatt in a still from the film

New Delhi: Badrinath Bansal was neither present at dulhania Alia Bhatt's birthday party nor did he post a birthday wish for her on social media. But Varun made up for the delay with a cute cartoon of himself and Alia featuring as their Badrinath Ki Dulhania characters. The Student Of The Year actress blew 24 candles out on March 15 and Varun wished her a belated birthday captioning the 'Badri toon': "24 years of the dulhania." Alia reacted to the cartoon picture of herself and Varun with emoticons on Twitter. She sure loved it Varun. Produced by Karan Johar's Dharma Productions and directed by Shashank Khaitan, Badrinath Ki Dulhania stars Alia as Vaidehi, a headstrong girl from Kota and Varun as Badrinath, a simple boy from Jhansi. Alia and Varun's Badrinath Ki Dulhania hit screens on March 10.

Alia and Varun often featured in an array of adorable pictures ahead of the release of Badrinath Ki Dulhania, in which the duo feature as a young couple. We bring you some of them. You're welcome.

Welcome to UP. Lucknow

Behind the scenes. #lalaland. It's difficult posing with. @aliaabhatt cause we have so many pictures together but we try to come up fun stuff. Photo by Manoj thank u

In his review of Badrinath Ki Dulhania for NDTVMovies, Saibal Chatterjee writes: "Varun and Alia deliver energetic performances. The duo is well supported by Sahil Vaid (playing the hero's comic sidekick) and Shweta Basu Prasad (as a banking graduate forced into dull domesticity in a feudal household). The overall result is middling."

Promoted
Listen to the latest songs, only on JioSaavn.com
Team Badrinath celebrated the film's success with a grand party in Mumbai on Thursday, which was attended by celebs like Karan Johar, Tapsee Pannu, Aditya Roy Kapur, Sonaksh Sinha and John Abraham.

Alia Bhatt will next be seen in Ayan Mukerji's Dragon, co-starring Ranbir Kapoor. Varun Dhawan's upcoming film is Judwaa 2, in which he will co-star with Tapsee Pannu and Jacqueline Fernandez.