We, as fans, love this Bachchan vs Bachchan battle of posting throwback photos 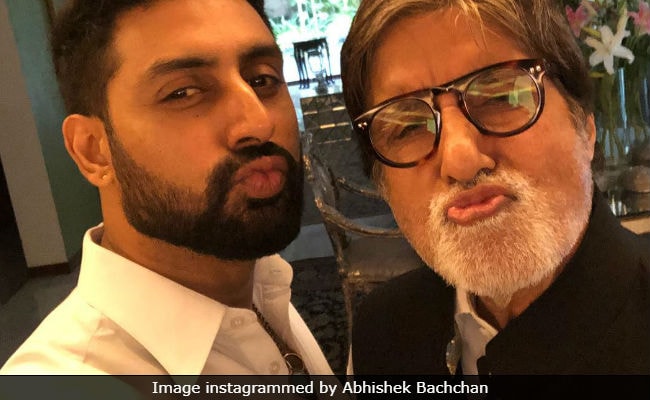 Remember when Amitabh Bachchan posted his actor Abhishek's childhood picture on Instagram and captioned it: "you look like sauce!!"? Well, it's 'payback time. It took some time but Abhishek dug up an old picture of Amitabh Bachchan, in which he looks suave, and wrote: "And he said I look like sauce! #flashbackfriday #payback." Nice one, Abhishek. This Bachchan vs Bachchan battle of posting throwback photos is a treat for fans, who are getting unfiltered access to some super cool family photos and of course, their sense of humour. Another example of Bachchans' sense of humour is the comments exchange between Abhishek and his elder sister Shweta Bachchan Nanda. Soon after Big B posted Abhishek's photo, Shweta tagged her brother and wrote: "Note, I did not post this, Pa did." Abhishek was not fooled by his sibling's tactic and replied: "... and I know who gave him the picture."

Here's what Abhishek Bachchan shared on Instagram on Friday:

And he said I look like sauce! @amitabhbachchan #flashbackfriday #payback

And here's what Amitabh Bachchan posted a few days ago:

The Bachchans are a busy lot as of now. Amitabh Bachchan is currently looking forward to the release of Thugs Of Hindostan, which opens in theatres next month, while the Shweta Nanda is awaiting the release of her debut novel Paradise Towers. The fiction novel will be launched on Mr Bachchan's birthday on October 11.

Amitabh Bachchan recently got his copy of Shweta's novel which made him quite emotional and he posted this on Instagram:

... that moment when your daughter hands you her first authored book , it's like when you first held her when she was born .. .. the birth of a creative talent .. and my prayers and blessings