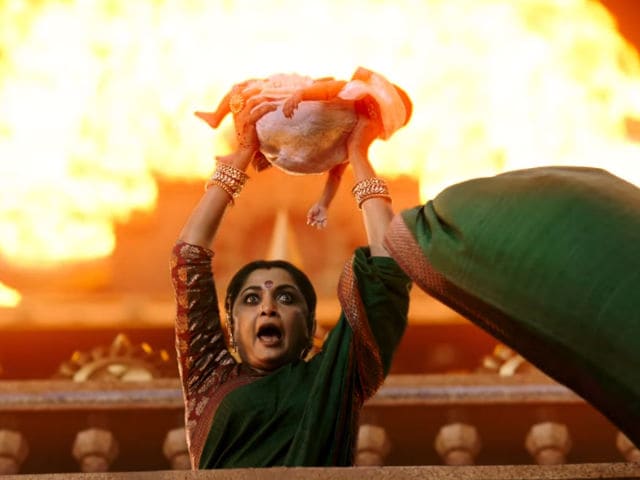 Ramya Krishnan as Sivagami in Baahubali: The Conclusion

New Delhi: Not everything in upcoming film Baahubali: The Conclusion is about 'Why Katappa killed Baahubali.' This time director SS Rajamouli talked about two other characters in the film - Sivagami (Ramya Krishnan) and Devasena (Anushka Shetty). The ace director revealed that Sivagami, Amarendra Baahubali's foster mother and Devasena, Amarendra Baahubali's wife shared a 'love hate' relationship and the audience should expect a lot of drama between. "Sivagami is a strong character, but Devasena is equally strong. The love and hate relationship between them forms the crucial 20-30 minute sequence which will be dramatic and attention holding. So many times I see the drama scenes between them and I forget to edit. I am fortunate to have those two characters in my film. They gave so much of depth to the film," Rajamouli said at an event, reports IANS.

Rajamouli along with Ramya Krishnan and Rana Daggubati unveiled the first book of Baahubali trilogy - The Rise Of Sivagami. "A character (Sivagami) which is so powerful and I get to do that...is something that doesn't happen in many people's lives. So, I am just blessed and happy," Ramya said at the event.

Rana Daggubati, who plays antagonist Bhallala Deva in the Baahubali series, said: "It (King Bhallala Deva) is one of the finest characters ever written. In seven years of my film career, I was part of Baahubali for five years so, most of what I know is through this film," reports IANS. The actor, who has starred in Bollywood films like Baby and Dum Maro Dum, also added: "Seven years ago when I started as a film actor, I did my first film in Telugu, second in Hindi and then did a cameo in a Tamil film. I was hoping that at some point of my life there will be cinema that will break these barriers. I am sure there will be many more films that will continue to break these barriers. It's a great time to be in movies right now."


In Baahubali: The Beginning, which released in 2015, Mahendra Baahubali learns about his true identity (that he is the son of an excellent warrior prince Amarendra Baahubali, played by Prabhas and Devasena) and vows to kill the usurper, his uncle Bhallal Deva and restore peace in the kingdom of Mahishmati.

Promoted
Listen to the latest songs, only on JioSaavn.com
The Baahubali: The Beginning is re-releasing on April 7 and the film's concluding part will hit the screens on April 28.