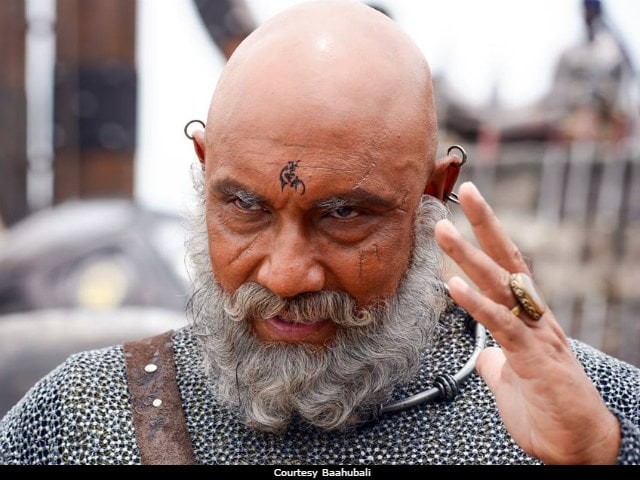 Baahubali: A poster of the film (courtesy BaahubaliMovie)

New Delhi: Baahubali: The Conclusion, easily one of this year's biggest films, is just over a week from release and pro-Kannada organizations are determined to prevent it from releasing in Karnataka. The call for a ban was prompted by remarks that actor Sathyaraj, who plays the pivotal character of Katappa in director S S Rajamouli's two-part fantasy, made about the Cauvery river issue. Speaking to news agency PTI, Baahubali producer Shobu Yarlagadda said the matter was 'sensitive' but that he hoped it would soon be settled 'amicably.' "This is a very sensitive issue, and I don't want to comment much on it. The only thing I want to say is we will resolve the issue amicably in the interest of all concerned," PTI quoted the producer as saying.

When asked if Team Baahubali had scheduled a meeting with activists, Mr Yarlagadda said nothing has been decided yet. "We have not yet decided the nature of talks. For now, I do not want to offend anybody by giving any statement," PTI quoted him as saying. Asked about the probability of incurring losses if the film fails to release in Karnataka, he said: "First, we have to resolve the problem," reported PTI.

Vatal Nagaraj, president of politically-linked outfit Kannada Chalavali Vatal that is spearheading protests against Baahubali, spoke to PTI earlier about why they were targeting this film and not others starring Sathyaraj. "Other films of Sathyaraj which were released earlier here weren't worthy and noticeable. However, Baahubali is recognized both nationally and internationally. We were waiting for the right time," he said. Sathyaraj's alleged remarks on the Cauvery issue were reportedly made several years ago, after which he has appeared in films like Motta Shiva Ketta Shiva and Hyper.

Director Rajamouli defended his actor in an interview to India Today recently, saying: "I worked with Sathyaraj for almost five years and I could have never ever imagined he is a person who could try to hurt someone. Some videos were posted on the internet. When we started inquiring, we learned that whatever comments Mr Sathyaraj made it was nine years back. And after that, about 30 films of his were released in Karnataka. Baahubali: The Beginning released. No one had problems with that. And suddenly, raking up the issue at this point in time is not right."

Promoted
Listen to the latest songs, only on JioSaavn.com
As the infamous senapati Katappa who killed Baahubali in the first part, Sathyaraj's story arc in the second film is of tremendous interest to fans. Baahubali: The Conclusion stars Prabhas in the title role, Rana Daggubati as Bhallala Deva, and actresses Ramya Krishnan, Tamannaah Bhatia and Anushka Shetty. The film releases in Telugu, Tamil and Hindi on April 28.