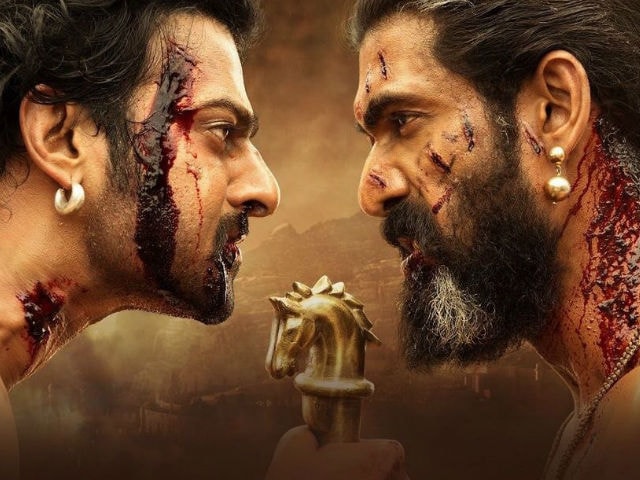 Baahubali 2: Prabhas and Rana Daggubati in a film still.

New Delhi: The mega-buck two-part Baahubali has reached its fittingly filmy climax today with the release of Baahubali: The Conclusion - title self-explanatory. 'Worldwide mania,' announced Karan Johar, the distributor of the Hindi version of the film, in a tweet this morning. Other celebrities, like Tamil star Dhanush, wished Team Baahubali luck. The Baahubali films, the first of which released in 2015, has been a five-year project for its cast and crew. Directed by S S Rajamouli, Baahubali is quite literally a game of thrones set in an universe that is a stunning spectacle created by VFX. Baahubali: The Conclusion opens across a record number of screens worldwide and was given a Rajinikanth-style reception by fans who poured milk on posters and set off fireworks.

Enchanting the world one minute at a time! #Baahubali2 in cinemas now! @ssrajamouli@Shobu_@karanjohar@apoorvamehta18@RanaDaggubatipic.twitter.com/rAbaG9lDfY

Baahubali: The Conclusion will double part one's first day business of Rs 50 crore, fans say. The film ran into heavy weather in Tamil Nadu where unpaid dues between distributors and producers led to the cancellation of the early morning shows. The film eventually released at 11 am.

Promoted
Listen to the latest songs, only on JioSaavn.com
Everywhere else, the madness took over as early as 6 am with queues waiting to catch the 7.30 am show in Hyderabad and elsewhere.

Baahubali: The Conclusion stars Prabhas in the titular role, Rana Daggubati as Bhallala Deva, Anushka Shetty as Devasena, Tamannaah Bhatia as Avantika, Ramya Krishnan as Sivagami and Sathyaraj as Katappa. The film released today worldwide in Tamil, Telugu and Hindi.