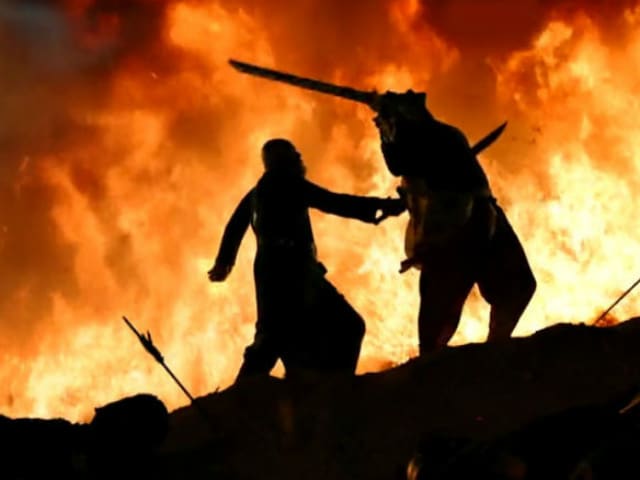 Baahubali 2 will release in Tamil, Telugu and Hindi on April 28

Chennai: With the trailer of Baahubali, The Conclusion breaking new records, everyone is eager to know the answer to one question -why did Katappa kill Baahubali? Now, in an exclusive chat with the film's National Award-winning Art Director, Sabu Cyril, we actually get a peek into the making of that iconic scene. Needless to say, the key scene plays an important role in the prequel as well. A lot of man-hours of preparation and planning went into the crafting of the giant location where Katappa kills the great warrior Baahubali. But did you know, the location you see on screen, was the result of painstaking labour, constructed in record time, because the actual location originally chosen became unsuitable?

The work of the art director therefore is not just set designing but also involves having the skills of improvisation when things don't go according to plan, especially in a giant project like Baahubali. Sabu discloses, "The important scene where Katappa kills Baahubali was originally supposed to be shot in the famed Chambal valley in the North. The location recce had been done and everything was finalized. But just one month before the shoot, when SS Rajamouli sent someone there, we found that the entire area had become green, thanks to the rains. It was no longer the barren and arid rough terrain we needed. It was clear that we had to find an alternate location fast, which was not an easy task. It was at that moment that I recalled a quarry that existed near Hyderabad that would be suitable. It was an ideal location, spread over 6 acres. After Rajamouli inspected it, we realized that we had to convert it, into the arid kind of zone he wanted, in a record time of 30 days. I agreed to take on the challenge and asked Rajamouli for an extra 15 days, making it a total of 45 days to construct the giant set." The task before Sabu's team of moulders, painters, carpenters, masons and craftsmen, was enormous. Giving us an idea of the kind of work involved, Sabu said, "The quarry area had to be filled with 100 truckloads of mud. To make it accessible to the cast, crew and workers, we had to literally construct roads around and into the area. To give it the look we wanted, we transported trees from Rajasthan and then made around 30 replicas of those trees in fiberglass, to be fixed on the set. We had giant roots made on walls and rocks. One major tree in the scene was around 60ft tall and another tree ran upto a height of 30 ft with a girth width of 40 ft. Every rock in that scene was of 60 ft height. Every rock in the quarry had to be painted with a reddish tinge for the effect Rajamouli wanted in the shots. So we built giant scaffolding system on each of the rocks, spread across 6 acres, so that the painters could carry out the task."

Sabu asserted, "It was team work on a mammoth scale, with over 200 people working night and day, in our department alone. Armed with walkie talkies and always in touch with the ground staff, Rajamouli and I worked from concept to reality to get the location ready for the shoot to begin, in record time. Improvising when things don't work according to plan is one of the many challenges of my job. With Baahubali being on such a large scale, challenges come almost every day, when set properties are damaged or things don't work according to plan. But the end result on screen, when no-one can make out what's real and what's not, it makes all the effort worthwhile."