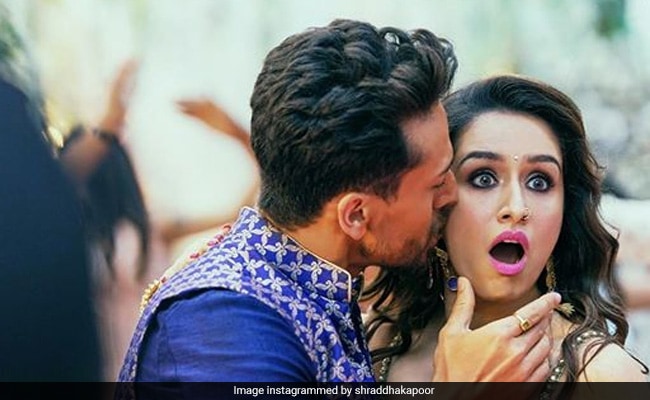 A still from the new track Bhankas. (courtesy: shraddhakapoor)

The makers of Baaghi 3 released another song Bhankas from the film. Last week,Baaghi 3's first song Dus Bahane 2.0 had released. The song was a rehash of the title track Dus Bahane of 2005 film Dus. Yet again, the song Bhankas is a revamp of Ek Aankh Maru Toh from 1984 film Tohfa. The original track was one of Bappi Lahiri's hit songs. Ek Aankh Maru Toh featured Jeetendra and Sridevi dancing in the fields. The track Bhankas starts after Tiger Shroff winks at Shraddha Kapoor. The whole song is set at Riteish Deshmukh's wedding, who also features in the film. He is getting married to Ankita Lokhande in the new song. Tiger and Shraddha can be seen grooving around together at the wedding. The song Bhankas credits Bappi Lahiri, Dev Negi, Jonita Gandhi and Tanishk Bagchi.

Tiger Shroff shared snippets from the time when the makers and the cast of Baaghi 3 were working on the new song with Bappi Lahiri. He tweeted a video on Tuesday saying: "A sneak peek from the gala time we had with the bling king! Thank you Bappi Lahiri for adding your golden touch to Bhankas!"

A sneak peek from the Gala time we had with the bling king!
Thank you @thebappilahiri for adding your golden touch to #Bhankas! Song Out on 19th Feb.#SajidNadiadwala@ShraddhaKapoor@Riteishd@khan_ahmedasas@WardaNadiadwala@TSeries@foxstarhindi@NGEMoviespic.twitter.com/ky2xaTzdn3

Tiger Shroff and Shraddha Kapoor feature in lead roles in Baaghi 3. Directed by Ahmed Khan, Baaghi 3 marks the third instalment to the Baaghi series. Tiger Shroff's character has been named Roonie, like the previous films. Shraddha Kapoor, who starred in Baaghi, will play the role of his love interest as Siya. Tiger Shroff's father Jackie Shroff will also feature in the film as his on screen father. The real life father-son duo will be seen sharing the screen space for the first time. Baaghi 3 is scheduled to release on March 6.