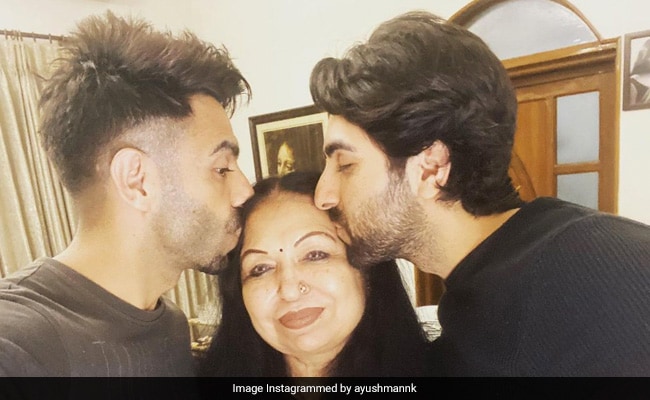 Ayushmann and Aparshakti Khurrana with their mom (courtesy ayushmannk)

A white tee shirt, a cap, and a guitar — armed with all these things and a smile that has stolen many hearts, Bollywood's multifaceted sensation Ayushmann Khurrana is breaking the internet. The actor who has garnered much praise in films like Andhadhun, Article 15, Gulabo Sitabo and Bala has taken Instagram by storm with a new song that he has sung with all his heart. This should come as no surprise as the actor-singer has dedicated the song to his mother on her birthday. As a gift to his mother, Ayushmann posted a video where he performed the song dedicated to his mother, alongside its composer Rochak Kohli. The lyrics were written by singer-actor Gurpreet Saini.

The Punjabi song is full of warm words for his mother and is rife with metaphors that compare a mother's love to everything strong and beautiful in life.

Ayushmann wrote a long note, thanking his friends in the making of this song. He wrote, “Today's my mother's birthday. So thought of posting this again. Thank you Rochak Kohli for this heart-touching composition. Thanks Gurpreet Saini for the amazing lyrics. Happy birthday, Mumma!”

Fans couldn't hold back their emotions at these beautiful lines and the warmth with which Ayushmann sang the lovely piece. One user wrote, “Uff… rula diya [Gosh, it brought me to tears]. My heart is full.”

Another summed up what we were all feeling and wrote, “Heartwarming”, which sums up the song.

A user came up with a comment, “Happy birthday to her! A big thanks to her for giving birth to two gems!”, referring to Ayushmann and his brother Aparshakti, who is also an actor.

Fans picked up lines from the song to show how much it touched them. One of them wrote, “‘Maa teri god ch fir so jaawaan, maa tenu ghut ke seene laawaan' [Mother, I would sleep in your lap; mother, I would pull you to my chest and hug you]. Aww, your expressions. Love you Ayush and happy birthday to maa.”

Some wished good health to Ayushmann's mother while others left a string of hearts. Someone ushered prayers for a lost mother, “Oh sir, you entered in my deepest thoughts n prayers. May you rest in peace, maa. Miss you.”

Fans also came up with requests, “Could you make an official recording of this song?” and “So beautiful. Can you share the complete lyrics? The ultimate tribute to all moms.”

Ayushmann made his Bollywood debut with Shoojit Sircar's Vicky Donor in 2012. Following a string of hits such as Badhaai Ho, Article 15, Dum Laga Ke Haisha and Bareilly Ki Barfi, he got the National Film Award for Best Actor for his performance in the 2018 film Andhadhun. The actor will be seen next in projects such as Doctor G, Chandigarh Kare Aashiqui and Anek.