"I gave clap for each shot on this movie," wrote Ayan Mukerji 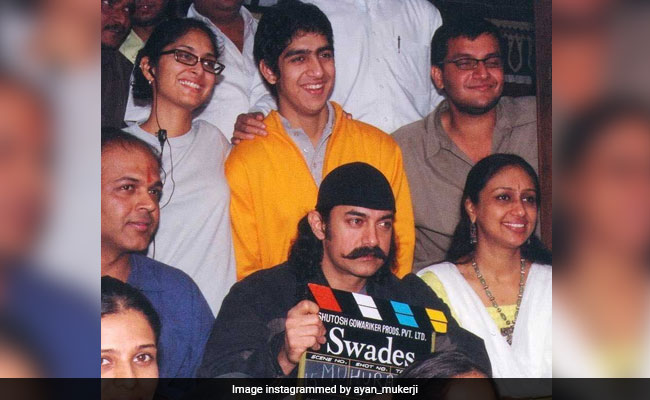 On the sets of Swades. (Image courtesy: ayan_mukerji)

Ayan Mukerji struck gold in his photo archive on Wednesday. The Brahmastra director, who began his career as an assistant director with Ashutosh Gowariker's 2004 film Swades, shared a rare picture from the sets of the film. Much to fans' dismay, film's lead actor Shah Rukh Khan was not present in the picture, but it does feature Aamir Khan, who can be seen sporting a moustache and wearing a black bandana. In case you are wondering what the 54-year-old superstar was doing on the sets of the film, we must tell you that Aamir Khan gave the first clap for Swades. Besides Aamir and Ayan, the throwback photograph also features Ashutosh Gowariker and Kiran Rao along with the film's team.

Ayan took a trip down the memory lane with his post and revealed that he was 19 when he started working as an assistant director. In his post, Ayan also thanked Ashutosh Gowariker and referred to him as his "first mentor." An excerpt from Ayan Mukerji's post read: "At the age of 19, I started my journey as an assistant director under Ashutosh Gowariker, my brother-in-law and first mentor." Ayan added the hashtags "#startingpoint #memorylane" and "#everythingisconnected" to the post.

Swades At the age of 19, I started my journey as an assistant director under Ashutosh Gowariker, my brother-in-law and first mentor. With Ashuda, I really understood the passion and sacrifice that each film takes, and how to devote oneself completely to the journey of the movie one is making... I gave clap for each shot on this movie, and in return, took from it, so much learning, such special relationships and many many memories... #startingpoint #memorylane #everythingisconnected

When Swades clocked 13 years in 2017, Ashutosh Gowariker shared pictures from the Mahurat day, wherein Aamir gave the first clap for the film. Take a look at the pictures here:

Thank you for your immense LOVE and REMEMBERING #13YearsOfSwades
Here are a couple of really special UNRELEASED stillls from the Mahurat Day! @aamir_khan@iamsrk#SunitaGowariker
Also, my experience of #1YearOfTwitter has been EXCEPTIONAL!! pic.twitter.com/BMt1PO2v5B

Swades emerged as one of the most successful films of 2004. Other than Shah Rukh, the film also featured Gayatri Joshi, Kishori Ballal and Makrand Deshpande in key roles. The film received two National Awards and it resonates with today's generation through its iconic songs like Yeh Jo Des Hai Tera, Yun Hi Chala Chala and Yeh Taara Woh Taara.