Avrodh Review: The surgical strike story is tweaked ever so slightly in the hope of creating some space for manoeuvre but the changes fail to dispel a sense of deja vu. 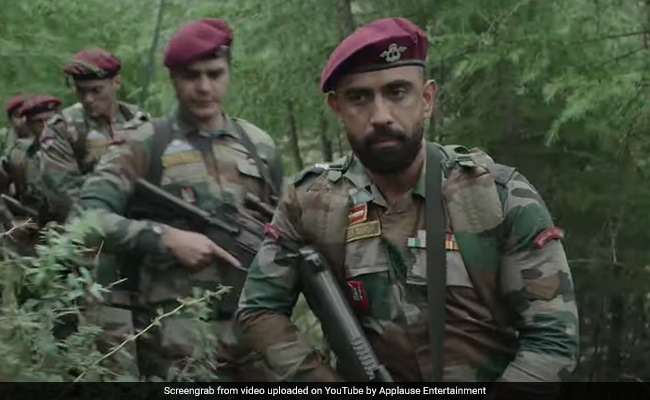 Avrodh Review: A still from the web-series. (Image courtesy: YouTube)

The dust has barely settled on a cinematic testimonial to a recent military success registered by the Indian Army (Uri: The Surgical Strike, released in January 2019). We now have another filmed enactment, this time around in the form of a web series, that gives us more of the same.

Avrodh: The Siege Within, a nine-episode SonyLIV series, makes no attempt to camouflage its intent, which is to commend and perpetuate an agenda-serving narrative about a supposedly new India that shoots from the hip.

The show is mounted competently enough but nuance isn't its forte. It regurgitates what we already know and does so in a manner that leaves no room for serious thought and discussion. The surgical strike story is tweaked ever so slightly in the hope of creating some space for manoeuvre. But the changes fail to dispel an overwhelming sense of deja vu.

The actors are hobbled by a drearily mechanical narrative. The show, which rightly showcases the valour of the soldiers who avenged the Uri terror attack four years ago, is riddled with stilted dialogue and distended situations where characters appear to address the audience rather than each other.

Avrodh takes its own sweet time to gather momentum. It springs to some sort of life only in the penultimate episode. The final act is passable. The epilogue, designed to elucidate the political upshot of the surgical strike, is exceedingly laboured. The rest of the show is stuck squarely in war-room parleys, military pep talks, terrorist conspiracies and skirmishes on the ground. Hackneyed as hell!

Adapted for the screen from Shiv Aroor and Rahul Singh's book 'India's Most Fearless', the Raj Acharya-directed show is scripted by Harmanjeet Singha, Sudeep Nigam, Abhishek Chatterjee and Aadhar Khurana. It covers pretty much the same ground that Uri: The Surgical Strike did with Vicky Kaushal leading the charge with oodles of josh.

There is none of the same exuberance here although lead actor Amit Sadh, solid all the way, gives the endeavour his best shot. There is much else that is amiss in this monotonous series. It allows unabashed pamphleteering to take precedence over storytelling.

Fusty defence and security establishment officials mouth platitudes aplenty as the soldiers gear up for a crucial life-and-death sortie in an unfamiliar, high-risk terrain. We know exactly how it is all going to end. The show, therefore, wants us to be invested more in the process than in the actual mission. It is a drill so dull that it could cure insomniacs.

Terrorists are eliminated in a couple of routine Army raids in Kashmir led by a Major (Darshan Kumaar) before Avrodh turns its attention to the hate speech of a Punjabi-speaking terror kingpin (Anil George) and the assembling of a crack anti-terrorism unit under another unbendable Major (Amit Sadh, who comes into the picture only at the end of the fourth episode) for an assault across enemy lines.

The series also concerns itself with the metamorphosis of a journalist (played by Madhurima Tuli). A fearless newshound when we first meet her, she mutates into a tame, conforming patriot. For good measure, the lady, despite losing her job, intones: "Desh ke upar kuch nahi (There is nothing above the nation)."

The audience has been treated in recent years to a surfeit of military op dramas and espionage thrillers. Not only do a majority of these shows and films have nothing new to offer anymore, they give the actors, no matter how earnest they are, little scope to explore genuine emotions and wade into larger questions about war and its repercussions.

"War is not cheap but it is the human cost that is the highest," one character says in Avrodh. But that is too little too late after the chest-thumping and back-patting that precedes, accompanies and follows the mission.

Why should the audience be interested in an extended summary of the circumstances that surrounded the 2016 terror attack on the Uri army base and the subsequent surgical strike on a hideout of terrorists in Pak Occupied Kashmir? Don't we have the details coming out of our ears already? It is only another disingenuous pretext to hammer a particular line of thinking into our heads.

Amit Sadh and Darshan Kumaar are sure on their feet. However, with little to play around with in terms of psychological novelty, the duo is hard pressed to salvage the show. And, of course, it is great to watch the likes of Neeraj Kabi, Anil George and Arif Zakaria (underutilised here) on the screen.

Neeraj Kabi, playing the National Security Adviser (NSA), is poise personified even when he is mouthing the most absurd lines. But even he cannot avoid sinking into awkwardness. In one conversation, his character instructs a television news channel boss to "put a leash on" a troublesome field reporter.

The Indian Army definitely does not need a puff job. Our soldiers put their lives on the line day in and day out. Our politicians don't. It is they need storytellers pliant enough to cherry-pick convenient chapters and go to town with them. On the screen, it makes for a crashing bore.

The Prime Minister, essayed by veteran actor Vikram Gokhale, remains unnamed in Avrodh. "I am not in politics to fulfil an ambition but to serve the people," he says in one scene. It isn't clear what that utterance has got to do with the military operation this show is about.

The valour of India's spies and soldiers, the threats posed by militants, and provocations from across the border - which obviously cannot be denied - have worn thin as fodder for fiction. When presented sans a shred of fresh insight, it can only be an exercise in futility.

Avrodh: The Siege Within wants to go all guns blazing but is let down by antiquated ammo. It is flattened by a fusillade of tired tropes.

(Avrodh: The Siege Within streams on SonyLIV)