At Soundarya's Sangeet, Rajinikanth Rocks The Dance Floor (Video Inside) 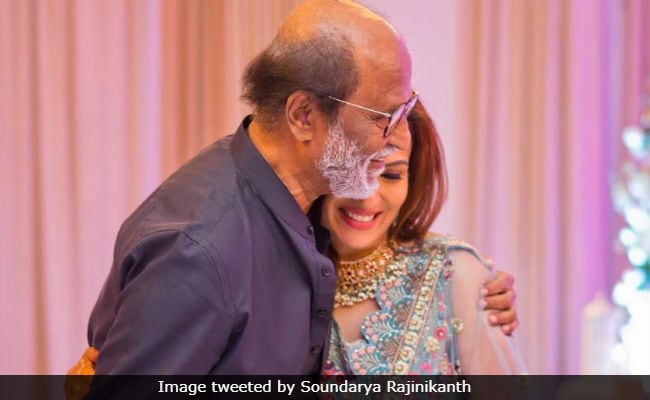 Rajinikanth with his daughter Soundarya at her sangeet. (Image courtesy: Twitter)

Soundarya Rajinikanth's wedding festivities began with a pre-wedding reception on Friday followed by a combined sangeet and mehendi ceremony on Saturday. Soundarya shared some inside photos from the sangeet ceremony on Twitter, featuring her father Rajinikanth, son (with first husband R Ashwin) and finace Vishagan Vanangamudi. But fan clubs got hold of a video from the ceremony, in which Rajinikanth can be seen dancing to his heart's content. The official wedding photographers shared another picture of the couple and described the sangeet ceremony as, "... One of the most amazing sangeets we could ever imagine shooting. Not every day do you get the superstar Rajinikanth to break a leg on the dance floor."

Watch the viral video of Rajinikanth dancing at his daughter Soundarya's sangeet ceremony:

On Sunday, Soundarya shared three pictures from the ceremony on Twitter and wrote: "Blessed ad grateful beyond words!!!! The three most important men in my life... my darling father... my angel son... and now you my Vishagan."

Earlier on Friday, Rajinikanth and his family hosted a pre-wedding reception for the couple, which was attended by close friends and family members. The wedding ceremony will take place on February 11 and actor Kamal Haasan is reportedly expected to attend the function. Rajinikanth met Kamal Haasan last week reportedly to invite him to the wedding.

Soundarya is the younger of Rajinikanth's two daughters. Her sister Aishwaryaa is married to actor filmmaker Dhaush. Soundarya is a graphic designer and filmmaker. She last directed Velaiilla Pattadhari 2, featuring Dhanush and Kajol.

Meanwhile, this is also Vishagan Vanangamudi's second marriage; he was earlier married to Kanikha Kumaran, a magazine editor. Vishagan owns a pharmaceutical company and he is also an actor - he was recently seen in Manoj Bheeda's Vanjagar Ulagam.