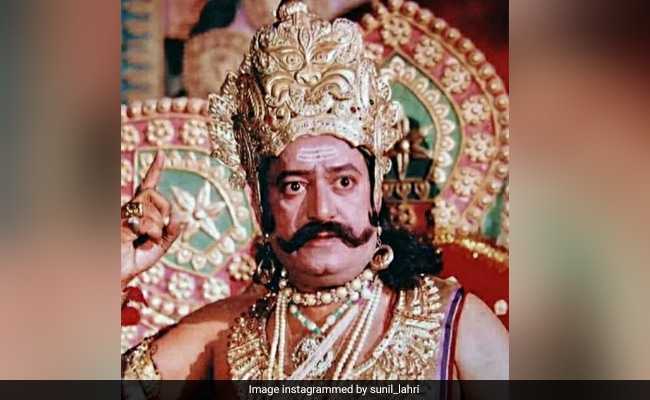 Veteran actor Arvind Trivedi, best known for portraying the role of Raavan in Ramanand Sagar's Ramayan, died at the age of 82. On social media, actors Arun Govil and Sunil Lahri confirmed the news of Arvind Trivedi's death and remembered their Ramayan co-star in heart-wrenching posts. Arun Govil, who played the role of Ram in the epic show, described Arvind Trivedi as "my dear friend" in his condolence tweet. Meanwhile, Sunil Lahri, who featured as Lakshman on Ramayan, wrote: "Bahut dukhad samachar hai ki hamare sabke pyare Arvind bhai (Raavan of Ramayan) ab hamare bich nahin rahe. Bhagwan unki atma ko shanti de (It's very sad that our beloved Arvind Trivedi is not amongst us anymore. May he rest in peace). I am speechless I lost father figure my guide, well-wisher and gentleman."

Actress Dipika Chikhlia, who played the role of Sita in Ramayan, remembered Arvind Trivedi as: "A very fine human being."

Prime Minister Narendra Modi mourned the Ramayan actor in a condolence tweet and said: "We have lost Shri Arvind Trivedi, who was not only an exceptional actor but also was passionate about public service. For generations of Indians, he will be remembered for his work in the Ramayan TV serial. Condolences to the families and admirers of both actors. Om Shanti."

We have lost Shri Arvind Trivedi, who was not only an exceptional actor but also was passionate about public service. For generations of Indians, he will be remembered for his work in the Ramayan TV serial. Condolences to the families and admirers of both actors. Om Shanti. pic.twitter.com/cB7VaXuKOJ

Speaking to ETimes, Arvind Trivedi's nephew Kaustubh Trivedi said that the actor was suffering from age-related ailments and died of a heart-attack on Tuesday night: "He was not keeping well for quite some time, but today he suffered a heart attack and that led to multi organ failure.'' As per reports, Arvind Trivedi's funeral is scheduled for Wednesday morning.

Earlier this year, Arvind Trivedi was the subject of a death hoax when Sunil Lahri issued a clarification and said: "By God's grace, Arvind ji is fine and I pray to God that he stays healthy."

During the nationwide lockdown last year, Doordarshan brought back Ramanand Sagar's Ramayan on television, when it started airing twice a day. A video of Arvind Trivedi watching the Sita haran scene had gone crazy viral then. Ramayan, which first aired on Doordarshan in 1987 and gained instant popularity, made stars out of Arun Govil, Deepika Chikhlia and Sunil Lahri, known to fans as Lord Ram, Sita and Lakshman.