Ariana Grande's Thank U, Next: All The Pop Culture References, Cameos In New Video

From Mean Girls to Legally Blonde 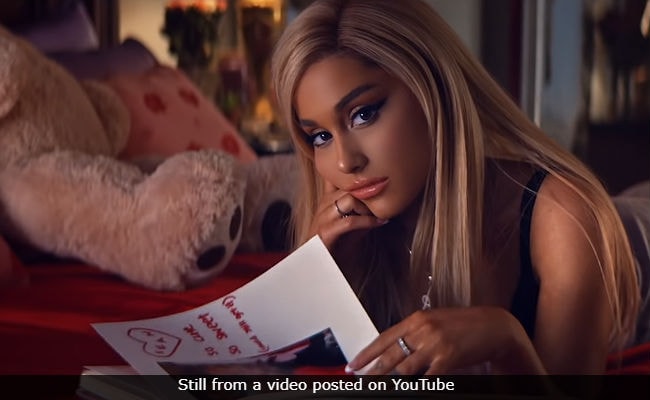 Ariana Grande in a still from the song Thank U, Next. (Image courtesy: YouTube)

It's not October 3, but today is a very important day for fans of the 2004 film Mean Girls - especially if they happen to also be fans of Ariana Grande.

On Friday, Grande released the long-awaited video for Thank u, next, the airy bop she released on the heels of her split from Saturday Night Live comedian Pete Davidson. In the song, which Grande unveiled minutes before the Novembe 3 episode of SNL, the singer name-checks Davidson and several of her other exes, including Big Sean and the late Mac Miller.

As Grande hinted in sneak peeks this week, the music video features a bevy of pop culture references - including nods to Mean Girls, Legally Blonde, Bring It On and 13 Going on 30. It also features tongue-in-cheek cameos from some of the stars of those movies, plus members of Grande's inner-circle and one Kris Jenner.

And like the song, the music video, directed by Hannah Lux Davis, alludes to Grande and Davidson's broken engagement. Below, we break down the biggest moments, inside jokes, cameos and pop culture references. (See something we didn't? Let us know in the comments!)

As Grande assumes the role of Regina George, who was played in the film by Rachel McAdams, the music video's intro parodies the iconic "How do I ever begin to explain Regina George" scene, a montage of North Shore High School students sharing outrageous anecdotes and urban legends about their resident Queen Bee.

Colleen Ballinger, the YouTuber known as Miranda Sings, kicks things off. "One time on Twitter, I heard that Ariana was pregnant, so I got pregant so we could be pregnant at the same time," says Ballinger, who really is pregnant. "Turns out it was just a rumor."

Grande also taps Jonathan Bennett, who played Regina's ex-boyfriend Aaron Samuels, to reprise his famous role. "Ariana Grande told me I look sexy with my hair pushed back," he says, referencing a classic line from the movie.

Gabi DeMartino, the YouTube star who "lived like Ariana Grande" in a viral parody, offers a twist on another classic line. "Ariana says 'honest to God knock me out,' so I decided to punch myself in the face," she tells us. "It was awesome." (Fun fact: Grande really does say that - the phrase was the subject of a matching tattoo she got with Davidson).

And we get our first official Pete Davidson reference when Stefanie Drummond, who played North Shore student Bethany Byrd (the one Regina actually punched in the face), announces that "Ariana broke off an engagement, so I found a guy to propose to me and I broke off an engagement." The student standing next to her is Scott Nicholson, one of Grande's backup dancers, in drag.

Fellow pop singer Troye Sivan pokes fun at the fans who misheard one of the song's much-discussed lyrics. Grande sings of meeting someone new whose "name is Ari," but some fans thought she said "Aubrey."

As the song begins, Grande-as-Regina is adding entries to her Burn Book (another significant reference). When she sings "Even almost got married / And for Pete I'm so thankful," she glues a photo into the book. Davidson's face is obscured, but it's a widely-circulated photo of the pair. Grande shared it to Instagram, after their relationship first went public, with a caption that sent the Internet ablaze: "i am but a pete davidson update acc stay tuned for more (pete follows / comments sumtimes)"

Next, we see her with the Plastics, Regina's loyal girl squad, which expanded in the film to include Lindsay Lohan's Cady Heron. Cady is portrayed by Grande's former Victorious co-star, Elizabeth Gillies. Rounding out The Plastics are Grande's close friends, Alexa Luria and Courtney Chipolone.

As Grande and her Plastics recreate the movie's iconic Jingle Bell Rock scene, the video's most apt cameo takes shape. It's Jenner (!!!!!!) taking on the role of Regina's mother (Amy Poehler, in the film), a cool mom, not a regular mom, who enthusiastically video tapes the performance, which is sexy to the point of being age-inappropriate. Jenner dances and sings along: "Thank u, next. Next!"

The next verse takes on some memorable scenes from the 2000 film Bring It On.

Grande enlists another Victorious co-star - Matt Bennett - to join her in the film's teeth-brushing scene, which originally featured Kirsten Dunst, as Torrance, and Jesse Bradford, as her love interest, Cliff.

What we almost missed: Many of Grande's friends appear (or reappear) in the cheerleading scenes. Tayla Parx and Victoria Monet, two of Grande's frequent collaborators who co-wrote Thank u, next, are among the cheerleaders in the Toros' rival squad, which featured Gabrielle Union in the movie.

Grande pays homage to Jennifer Garner's most famous rom-com in what many have read to be another reference to her broken engagement to Davidson. As Grande sings, One day I'll walk down the aisle / holding hands with my mama, she appears as Garner's character, wanna-be 30-year-old Jenna Rink, who crashes the wedding of her childhood sweetheart, Matt.

With tears in her eyes, she adjusts the miniature furniture in her dollhouse, which is covered with the wishing dust that got Jenna back to her adolescence so that she could confess her true feelings to Matt.

What we almost missed: The dollhouse features a tiny photo of Grande's face in a miniature bathtub filled with fake bubbles. Also, Mark Ruffalo, who starred opposite Garner in the 2004 film, is into this video.

In another sequence, Grande is Elle Woods (the role originated by Reese Witherspoon) in all her Elliptical-training, law studying and bend-and-snapping glory. The video also gives a nod to Bruiser, Elle's beloved chihuahua, who, Bustle notes, is portrayed here by Grande's own Beagle-Chihuahua mix, Toulouse.

If you think about it, Legally Blonde is an especially fitting reference for Grande. The entire movie is basically Elle Woods saying Thank u, next as she picks herself up after a painful breakup, goes to law school and kills it, proving her naysayers wrong in the process.

Jennifer Coolidge, who played the nail technician Elle taught to bend and snap her way to romance with a studly delivery guy, makes a cameo here.

Grande and Coolidge riff on the movie's "he's got a package" innuendo while making clear references to all that BDE talk (a NSFW explainer, for the uninitiated). "He was really cute, "Grande says. And it was really big.

"Well, I've only gone out with one guy that had a big front tooth," Coolidge says. (Are you screaming? We are screaming.) "And I liked it cuz he never got anything stuck in the front teeth."

What we almost missed: Ariana's Elle is studying "immigration and refugee law and policy," with a book on search and seizure by her side. Also, the delivery guy works for (wink, wink) BDE.

The Washington Post's Elahe Izadi contributed to this report.

(Except for the headline, this story has not been edited by NDTV staff and is published from a syndicated feed.)
Comments
ariana grandeariana grande tahnk u next videoariana grande music