Read inOther Languages
This Article is From Jun 11, 2018 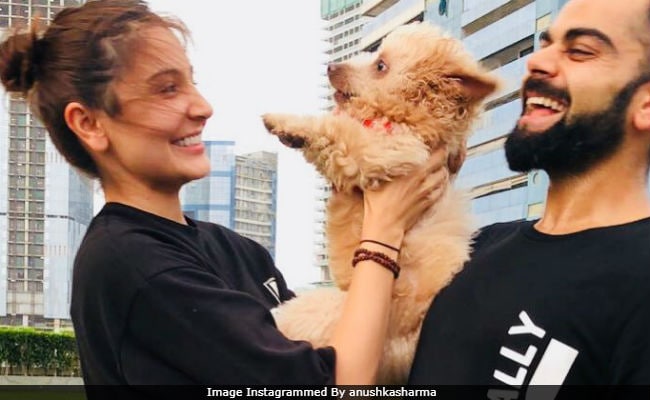 New Delhi: Anushka Sharma and Virat Kohli's latest picture on Instagram will drive away your Monday blues. Trust us. Last evening, the duo shared identical posts on Instagram, smiling and playing with their pet dog. (Aww, too cute for words). In the picture Anushka and Virat can be seen twinning in black and captioned their posts with a heart emoticon. And, yes, their picture is viral with over 1.4 million likes and counting. Celebs like Deepika Padukone, Fatima Sana Shaikh, Ayushmann Khurrana and Sania Mirza have also liked Anushka and Virat's picture. "Best picture on the Internet" and "Anushka and Virat are made for each other" are some of the several comments posted.

Anushka Sharma and Virat Kohli are couple goals, isn't it?

Anushka Sharma and Virat Kohli married on December 11 last year at a resort in Tuscany. Their wedding was an extremely private affair and apart from both the families, only close friends were attended the ceremony. They hosted two wedding receptions in India later.

Anushka celebrated her 30th birthday just last month in Bengaluru, where Virat played an Indian Premier League (IPL) match. It was the 'best birthday' for her, courtesy Virat. "Best birthday with the bestest, kindest, bravest man in the world. Love you for making it so special my love," wrote Anushka while sharing a picture loved-up picture, which sent the Internet into a meltdown.

Best birthday with the bestest, kindest, bravest man in the world . Love you for making it so special my love !

Promoted
Listen to the latest songs, only on JioSaavn.com
Here's how Virat wished her.

Happy B'day my love. The most positive and honest person I know. Love you

Anushka Sharma recently returned to Indian from the US, where she was filming Zero. The film also stars Shah Rukh Khan and Katrina Kaif and releases later this year.