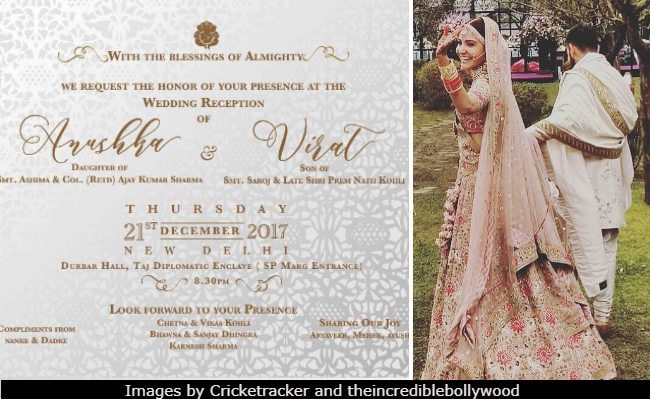 New Delhi: "We request the honor of your presence at the wedding reception of Anushka (Sharma) and Virat (Kohli)," reads the invitation card of Virushka's reception, which is scheduled for December 21 in New Delhi. Anushka and Virat got married in Italy on Monday evening and announced the big news with wedding photos on Twitter. They have planned two receptions, the second one for friends and colleagues in Mumbai is slated for December 26. Hours after wedding announcement, a photo of the reception invitation card of the newly-wed couple has been curated by folks on social media and shared by fan clubs. The invite has also been shared on the Twitter handle of a verified account titled Crick Tracker. The invitation card is tastefully designed with pale silver embossments on an ivory back ground. The writing is in golden with the names of Anushka and Virat written in a heritage-themed font.

Doors of the Durbar Hall in the Taj Diplomatic Enclave will be open to Virat and Anushka's hand-picked guest list on December 21, Thursday, at 8:30 pm. The invite has been sent on behalf of Virat's elder brother Vikas Kohli and his wife Chetna, his sister Bhawna Kohli Dhingra and her husband Sanjay Dhingra and also Anushka's brother Karnesh Sharma. "We look forward to your presence," reads the invitation card.

Promoted
Listen to the latest songs, only on JioSaavn.com
Anushka and Virat's destination wedding comprised all the rituals that a Hindu wedding is proceeded by - an engagement, mehendi and haldi ceremonies. Anushka wore Sabyasachi couture for all of her wedding functions - hot pink was her particular favourite. For the wedding, Virat also wore an embroidered sherwani from Sabyasachi collection. Anushka and Virat's wedding venue was countryside vintage resort in Tuscany where security was massively increased for the shaadi. Only those with wedding invites could enter the venue. Here are some photos and videos from inside the Italian wedding.

You can be an actress, a politician or a corporate power broker, but every bride succumbs to age old traditions on their wedding day! Fashion can come and go but we at Sabyasachi believe that tradition is timeless and forever! Sometimes the way forward lies in revisiting the past. For all jewellery related queries, kindly contact sabyasachijewelry@sabyasachi.com @anushkasharma @virat.kohli @bridesofsabyasachi #Sabyasachi #TheWorldOfSabyasachi #SabyasachiJewelry #AnushkaSharma #ViratKohli

For her engagement, Anushka @anushkasharma wanted to wear a Sabyasachi velvet saree. And we made it in our signature Gulkand Burgundy. It was hand-embroidered using miniature pearls and the finest quality zardosi and marori. She wore a stunning uncut diamond and pearl choker with matching studs. The entire look was complemented with kohl-rimmed eyes, red roses and our now iconic micro dot bindi. For all jewellery related queries, kindly contact sabyasachijewelry@sabyasachi.com #Sabyasachi #TheWorldOfSabyasachi #SabyasachiJewelry #AnushkaSharma #ViratKohli @bridesofsabyasachi

For her mehendi, Anushka @anushkasharma wanted a boho look full of bright colours. Hot pink was her favourite. We created a graphic lehenga in fuchsia pink and Indian orange. It was hand-printed by the famed Calcutta block printers and hand-embroidered with gota and marori. Artists from The Sabyasachi Art Foundation rendered a beautiful sixties pop print and it was silk screen printed, hand woven Indian silk. Anushka accessorised herself with earrings from the Sabyasachi Heritage Jewelry collection, a stunning pair of jhumkas crafted in 22k gold with Iranian turquoise, tourmalines, uncut diamonds and Japanese cultured pearls. Custom juttis in hand woven brocade and zardosi completed the look. Virat @virat.kohli opted for a signature khadi kurta churidaar with our classic fuchsia pink textured silk Nehru jacket detailed with the Sabyasachi House blazer buttons. A custom tan leather jutti with a zardosi crest was created for the ensemble. #Sabyasachi #TheWorldOfSabyasachi #SabyasachiJewelry #AnushkaSharma #ViratKohli @bridesofsabyasachi @groomsofsabyasachi

Wedding festivities done, Anushka Sharma and Virat Kohli will fly off to South Africa, where they will also celebrate New Years. While Virat will stay on to play a series, Anushka will return to Mumbai to resume her pending work commitments. The newly married couple will live in their new apartment in Worli, Mumbai.
Comments
anushka sharmavirat kohli