"A three part quiz, lots of laughter and two super competitive people... we were super chill and played by the rules (or not)," Anushka Sharma captioned her video 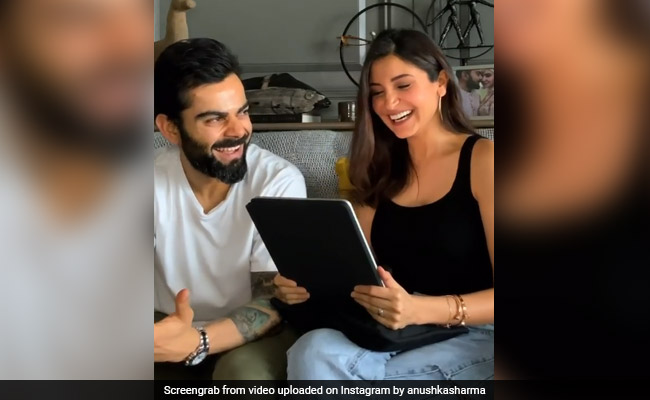 Anushka and Virat in a still from Instagram video (courtesy anushkasharma)

Anushka Sharma and Virat Kohli shared a fun-filled video, featuring no-filter versions of themselves, on their respective Instagram accounts on Wednesday. In the six-and-a-half-minute-long video, Anushka and Virat take quizzes about each other, test each other's knowledge about cricket and films and make honest revelations about their marriage, the rapport they share and their quirky traits. In the last segment of the video, they play a game of "Who is more likely to", which begins with Virat confessing he is a "terrible photographer". Talking about apologising after a fight, Anushka reveals she is the first one to say sorry after an altercation: "I say it immediately." In the segment, Anushka also reveals that she is most likely to almost always get in trouble and that Virat is more likely to go on a space mission. Did you know Anushka apparently talks to plants? She also introduced Virat as a "sore loser."

Anushka shared the video with this caption: "A three part quiz, lots of laughter and two super competitive people... we were super chill and played by the rules (or not). Watch to find out who won!"

Here's everything you want to know about Virushka, as the couple are popularly referred to by fans:

@virat.kohli and I took a break with @instagram A 3 Part quiz , lots of laughter and 2 super competitive people... we were suuuuper chill and played by the rules (or not ????) Watch to find out who won ! #TakeABreak

Anushka Sharma and Virat Kohli had a destination wedding in Italy's Tuscany in 2017. Last seen in Zero, Anushka has been busy with her production ventures - Amazon web-series Paatal Lok, which released in May while Netflix film Bulbbul premiered in June. Meanwhile, cricketer Virat Kohli is awaiting the T20 league, which is all set to begin on September 19.