Anne Hathaway Says 'Hollywood Is Not A Place Of Equality' 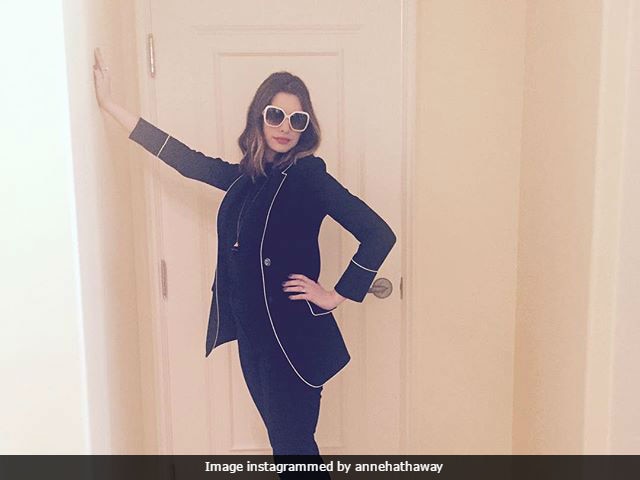 New Delhi: Anne Hathaway, who is currently shooting for her upcoming film Ocean's Eight, told etonline she was encouraged while working on the nearly all-female set of Ocean's Eight. The film, which is an all-female spin-off of the Ocean's Trilogy, is being directed by Gary Ross. Sandra Bullock, Cate Blanchett, Helena Bonham Carter, Rihanna, Sarah Paulson, Mindy Kaling and Awkwafina will also feature in the movie. Ocean's Eight is scheduled for release on June 8, 2018. The 34-year-old actress told elle magazine: "Hollywood is not a place of equality. I don't say that with anger or judgment, it's a statistical fact. And even though I've been in some female-centric films, I've never been in a film like this (Ocean's Eight)."

"It just kind of makes you aware of the ways you sort of unconsciously change yourself to fit certain scenarios," said Anne Hathaway. "It's not better or worse, or right or wrong, but there are certain things you understand about one another because of experiences you have in common. It's probably easy for men to take that for granted. Just being on a set where I'm the one who possesses that ease is really something. It's a nice alternative narrative," she added.

Promoted
Listen to the latest songs, only on JioSaavn.com
The Princess Diaries actress will feature on cover page of Elle Magazine's April issue. Anne Hathaway recently posted a picture on Instagram, captioned: "Thrilled to be on the cover of @ElleUSA! This was one of the most positive experiences I have ever had on a shoot - thank you: Hair: @estherlangham Nails: @deborahlippmann Makeup: @kateleemakeup Photographer: @terrytsiolis Stylist: @samiranasr EIC: @robbie_elle(sic)."

Thrilled to be on the cover of @ElleUSA! This was one of the most positive experiences I have ever had on a shoot - thank you: Hair: @estherlangham Nails: @deborahlippmann Makeup: @kateleemakeup Photographer: @terrytsiolis Stylist: @samiranasr EIC: @robbie_elle (Link in bio)

Anne Hathaway was last seen in the 2016 movie Colossal, directed by Nacho Vigalondo. The film also featured Jason Sudeikis, Dan Stevens, Austin Stowell, and Tim Blake Nelson in lead roles. In 2013, she won the Oscar for Best Supporting Actress for her performance in Les Miserables. The film, which was directed by Tom Hooper, also won her the Golden Globe, BAFTA, and SAG Awards for her performance.