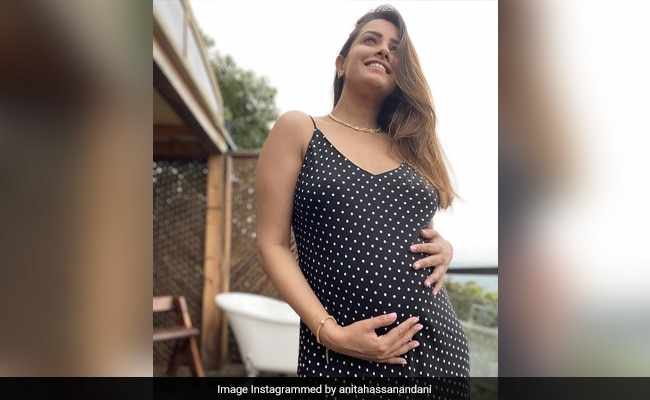 TV star Anita Hassanandani, who is expecting her first child with husband Rohit Reddy, shared a post from her maternity diaries on her Instagram profile recently. Anita wrote that every mother would understand what she is feeling and she added in her caption: "While I share this kiss, I feel the kicks. It is so amusing, exciting, miraculous and out of the world unreal experience." The actress added that words are not enough to describe what she feels and she wrote, "Cannot be described in words. Every mother would understand what I'm feeling."

Last week, Anita shared pictures with her husband Rohit from their Diwali celebrations. Take a look at the pictures here:

The couple shared the big news of their pregnancy on social media last month. "Getting ready for Reddy," Anita wrote in an Instagram video, while Rohit Reddy captioned his post, "No visual effects here! That bump is real."

Anita Hassanandani is a popular name in the Hindi television industry. The actress is best known for starring in TV shows such as Ye Hai Mohabbatein, Kabhii Sautan Kabhii Sahelii and Kkavyanjali, to name a few. She has also starred in movies like Kucch To Hais and Krishna Cottage, Anita was last seen in a brief appearance in the TV show Naagin 4. She played the role of Vishakha Khanna.

Besides TV shows, the actress has also worked in several Telugu, Kannada and Hindi films such as Sreeram, Veera Kannadiga, Aadanthe Ado Type, Yeh Dil and Hero, among others.