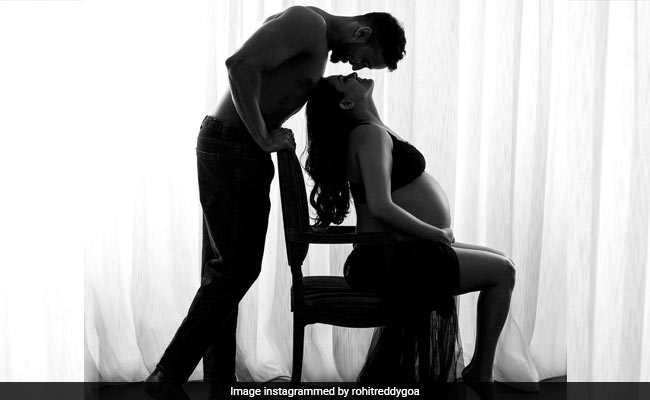 TV star Anita Hassanandani and her husband Rohit Reddy, expecting their first child together, recently did a photoshoot together and the pictures are simply stunning. On Wednesday, Rohit posted a shot from their photoshoot, in which the couple can be seen happily posing together. The greyscale shot features Rohit leaning on Anita as she can be seen sitting pretty on a chair. We also got a glimpse of her baby bump. Rohit rightly captioned the post and wrote: "Euphoria." Anita, sharing a solo shot on her profile, wrote: "Enjoying Beyonce vibes until mommy vibes kick in." She added the hashtags #positivevibesonly and #happyvibesonly to her post.

Last month, producer Ekta Kapoor, who also happens to be a good friend of Anita, hosted a baby shower for the actress in Mumbai and she shared snippets from it on her Instagram profile. Karishma Tanna, Krystle D'Souza, Sanaya Irani were also a part of the celebrations. See the pictures here:

Anita Hassanandani married Rohit Reddy in the year 2013. Anita Hassanandani is best known for starring in popular TV shows such as Ye Hai Mohabbatein, Kabhii Sautan Kabhii Sahelii and Kkavyanjali, to name a few. She has also starred in movies like Kucch To Hai and Krishna Cottage. Anita was last seen in a brief appearance in the TV show Naagin 4. She played the role of Vishakha Khanna.