"And We Laughed...": How Irrfan Khan's Last Co-Star Remembers Him 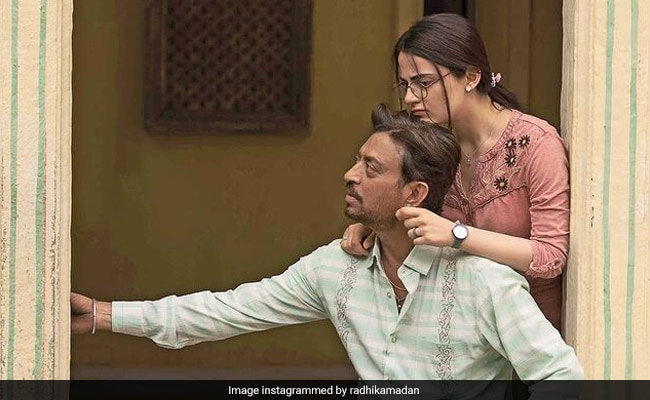 Today marks one year since Irrfan Khan died, and celebrities have been paying tributes to the acting genius on social media to mark his first death anniversary. Among them is Radhika Madan, who was Irrfan Khan's co-star in his last outing,Angrezi Medium. Travelling down memory lane, the actress posted a behind-the-scenes still from the film sets on Instagram, accompanied by a touching caption. "I remember I was playing with his beard before the shot and he told me you know what maybe this is the reason 'Champak' would not have cut his beard...I was like exactly! And we laughed...," a part of the post read.

Adding that they created their own "own pool of memories" and "own bubble where there were no words", she continued, "Silences spoke out loud. Where I was trying very hard not to be this 'I wanna learn everything from you' fan girl and he was unknowingly teaching me either about life or art every single day. To endless silent teachings and love. To this phenomenon people call Irrfan".

Irrfan's son Babil, who will be making his acting debut with Anushka Sharma-backed Qala, also posted an emotional message on the day. Sharing a rare photo of his father, he wrote, "There is a legacy that has already been concluded by my Baba himself. A full stop. Nobody can ever replace him. Nobody will ever be able to. To the greatest best friend, companion, brother, father, I ever had and ever will have. I love you so much, for the rest of this chaos we are choosing to call life".

The late star's wife Sutapa Sikdar opened up about his last moments in the hospital and posted his snap on Facebook.

"People living deeply have no fear of death"... Anas Ninyour favourite poet Irrfan. Last year tonight me and my friends...

Irrfan was undergoing treatment for neuroendocrine tumour since March 2018 in London. He briefly returned to India in February 2019 to shoot for Angrezi Medium. He spent his last days in Mumbai's Kokilaben Hospital, where he succumbed to a colon infection.