Anand Ahuja Thinks Sonam Kapoor Is "Being Dramatic" In This Video. But He Finds It Cute

Anand shared the video of his Instagram and wrote that "it's the simple things" that make "everyday phenomenal." 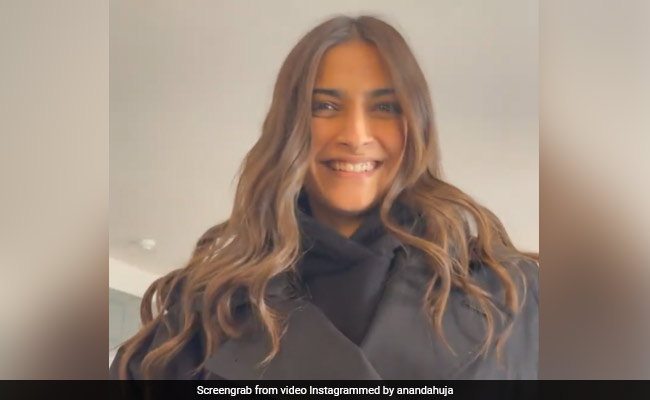 Sonam Kapoor and Anand Ahuja often share glimpses of their everyday life in London on Instagram and today was one such day. Anand Ahuja's post revealed how much he admires the little joys of life - he shared an adorable video of Sonam Kapoor struggling to put on her coat over a sweatshirt. Anand shared the video of his Instagram and wrote that "it's the simple things" that make "everyday phenomenal." In the video, Sonam can be heard calling Anand "ridiculous" for filming something as silly as that. Then Anand Ahuja goes on to tell her that it's not that cold outside that she needs a coat - "You are being dramatic," he says.

Meanwhile in London, Sonam Kapoor caught up with her friends Samyukta Nair, Arpita Mehta and Shehla Khan: "Nothing is more important than my girlfriends," she captioned a video set to the song Stay by Justin Bieber and The Kid Laroi.

Earlier this month, Sonam Kapoor and Anand Ahuja opened the doors to their London apartment to Architecture Digest magazine's September issue. Sharing glimpses of her London home, Sonam wrote: "The first time Anand Ahuja and I stepped foot into our flat it instantly felt like home! It's a two and a half bedroom space nestled in Notting Hill, and perfect for where we are in our lives at present."

Sonam Kapoor and Anand Ahuja got married in May 2018 and have been shuttling between India and London ever since. Back home in India, while Sonam lives in Mumbai's Juhu, Anand Ahuja's family home is in Delhi. Anand Ahuja owns the multi-brand sneaker store VegNonVeg, which has outlets in both Mumbai and Delhi. He is also the founder of the clothing brand Bhaane, which is a celebrity favourite.